Today has been a long and hectic day.

I started with another Russian lesson at 9.00am, we are still doing sounds and simple words, and still well within my comfort zone although we had a little bit of stress and intonation to think about today.  The hardest part is the scripted letters – often these look nothing like the printed symbols, and in some cases they are a barely discernible squiggle which could just as easily be the tail of another letter.  A lower case Д (D) looks like a “g” and a lower case Б (B) looks like a “d”!  You would think you can get by without knowing Russian script, but if you think about it even in English, how often do designers put script-style letters on signs and packaging? 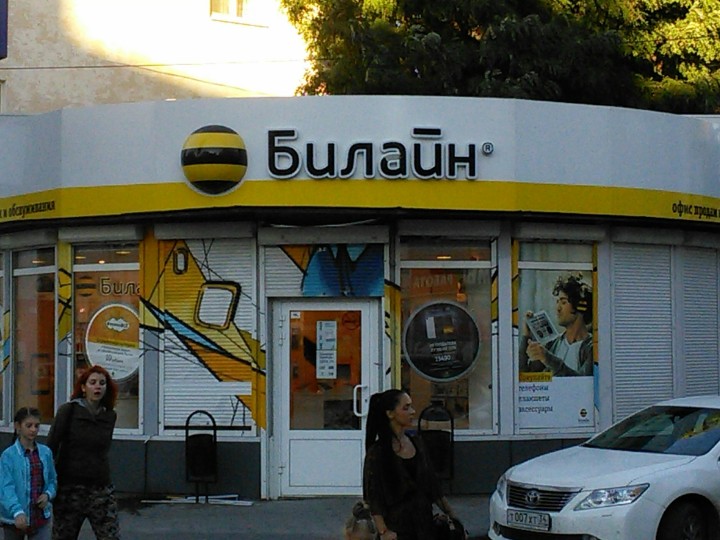 For example, this shop… the sign says “Beeline” (bee-layn)  The Б(B), the Л(L), the A and the Н(N) are familiar if you know printed Cyrillic, but the И(ee) and Й(Y) are in their script form, which looks like an English “u.”  And don’t get me started on ingredients and cooking instructions on packaged food!

Anyway, after the Russian lesson ended at 11, I had no more lessons until 3pm in a place called Tractorniy, so called because that is where they (used to) make tractors.  It is the furthest office location yet for me.  The office manager Nina happened to be at the central office after my Russian lesson collecting books, so I arranged to hitch a ride with her to Tractorniy.

When I went to bed last night I still had no idea what I would be teaching today.  I knew which book, I knew the number and age of the students, and what time the classes were, but I did not know what material I would be using, what aspects of grammar I would be teaching, or what exercises the students would be given.  I woke up at 7.30 and set off soon after 8, it was only at 11 that I was able to check my emails and see the lesson plans.  I got them printed off and started making sure I had all the necessary materials and handouts and made a note to ask about the ones I did not have.  At around 12pm we went to Tractorniy in a taxi.

This was a long journey towards the top (northern) end of Volgograd.  Nina told me Volgograd was the longest city in Russia at nearly 90km, and clings to the west bank of the river.  I had my first sight of the famous statue at Mamayev Kurgan as we went past, and the stadium being built for the 2018 football World Cup.  The main feature in this part of Volgograd was a huge plant – now mostly disused – that used to build Russia’s tractors, and during the war, their tanks.  This is called the Red October plant (previously the Stalingrad Tractor Factory) and stretched along several of the tram stops down to Tractorniy.  There is still some limited metalworking industry there, it still makes tractors but nothing like the numbers it did at its peak.

When we arrived at the satellite office, Nina took me to the mall so I could buy lunch.  It was another oppressive, sunny day and the air conditioning inside the mall was hugely welcome.  I bought a strawberry-doughnut-cake thing (which I have just remembered I have not eaten yet) and a cheese pizza slice, cheese being the only available flavour that did not include mushrooms.

I returned to the office and began the arduous task of preparing for three successive lessons in the space of what was now barely an hour, and needing to print or copy extra handouts for the students, as most of them were starting a new book and probably would not have bought it yet.  I checked my media in the classroom DVD player and found one disc that didn’t work and needed to be replaced.  I tried to get my papers in some sort of order with flags on the relevant pages I needed to refer to and an outline plan of the order of topics, but there was barely enough time to do that.  I certainly had not had time to refresh my own knowledge of the subject matter.

However students were arriving and I had a job to do, so I just grabbed what I had and dived in.  Of course once you are in a lesson, time starts to accelerate uncontrollably – you have a huge amount of things you need to teach, and by the time you’re halfway through the first topic you realise you are also halfway through the whole lesson time.  Perhaps because it was the first lesson and there was a lot of introduction and ice-breaking it was a particular problem today.  The students were all lovely, my first one was a young teenager with the class to himself, then I had three more teenagers in a banter-packed hour-and-a-half class, and finally I had two adult students, thankfully on topics where I was on much firmer ground in terms of confidence in my own expertise.

Unfortunately because the second lesson led straight into the third one, I didn’t have time to do the usual check before the last lesson for things like timing, I just assumed it was another one-and-a-half hour lesson.  It was only when Anastasia, one of the girls in the office stuck her head round the door curious why we were still there that I was told it was only meant to be one hour!  The students didn’t mind – they just had an extra half hour free tuition.  And I was enjoying the lesson so I didn’t feel upset or that I had wasted my time.

Ana took me to the tram stop and told me how to get back home, and I trundled up through the now dark city, reflecting on our conversation on the way to the tram stop.  It is a warm evening, but Ana told me it will get cold soon.  Temperatures can often reach -20, and with strong winds too.  It could be a very blue November.

*Edit: The Red October plant is the steelworks, still very much operational.  I’m not sure if the tractor factory and the steelworks were once all part of one complex, but it is certainly a very long, continuous industrial zone.