November 4th is a national holiday in Russia, the Day of Unity – when the Russian people united to drive out their foreign Polish overlords.  From 1917 to 2005 it was replaced by a holiday celebrating the Bolshevik Revolution.  It is not the most popular or well known holiday – many Russians know they have a day off but are not really sure what it is for.

I’ve been told that as the holiday commemorates Russian history, all the museums in the city are open for free today.  As it falls on a Friday this year, many people including myself are taking the opportunity of a long weekend break.  The school is open on Saturday but many cancellations are expected.  I have used a combination of the holiday, days off I am due and annual leave to take 5 straight days off work without teaching!

It has been a difficult week.  I was without internet for one evening, and had to find out how, where and what to pay to get it back on for November.  It turned out not to be that much (about £3) and I could pay at a phone shop near the school.

It’s impossible not to trail this in on your shoes 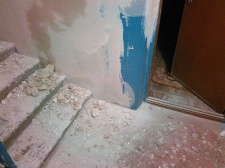 There was slightly less dust inside

My neighbour tried protecting her door with plastic… 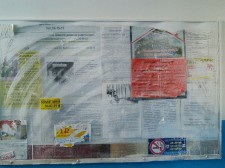 Noticeboard. The red notice is about last month’s elections

More problematic was waking up on Wednesday to find no water coming from the taps.  The school and my Russian friends assured me this is not unusual, they often repair and replace water pipes at the start of winter, but usually there is a notice.  My building has been in chaos, covered in plaster, paint, and for some reason clothes for the last 3 weeks so if there had been a notice it might well have been buried.  On Thursday there was still no water and I had little choice but to fall upon the charity of my fellow teachers in my old apartment, who let me shower there.  I was able to teach my lessons all clean and fresh, and when I got home, thankfully the taps were working again.  Now it seems the water is going to go off at my fellow teachers’ apartment, they actually got a notice.  They are welcome to use my facilities, such as they are!

My Russian continues to improve by increments – I have not really had time to study outside of my classes, but I find the classes very useful, and hearing people talking Russian around me all the time, I am starting to recognise more and more phrases and throw a few in myself.  I can order a cup of hot chocolate now, for example.  Last Sunday I found myself trying to get into the English Club at Tractorniy – I arrived half an hour before the start time and was apparently the first one there, and the building manager (security guard?) did not speak any English.  I managed to tell him I was the English teacher for the school, and I understood from him that no-one was here and he had the key for the school office.  I told him (or at least I think I told him) another teacher who spoke Russian would come and it would be better if she spoke to him!  He indicated I was welcome to wait in the reception area.  My knowledge of words like “school” “teacher” “other” “English” “room” and “key” thus found some practical function in the real world!

While I was at my old apartment I went through our first Russian lesson materials with Janelle (who joined our class in the middle of lesson 5).  Pleasingly, I remembered all the vocabulary, grammar and even pronunciation so you could say this was the first Russian lesson I gave!  Theoretically you can teach any language at a lower level than your own classification, despite this my Italian colleague Alessandro, who is classed as Upper Intermediate in English (though I assure him his English is almost flawless) is occasionally given Upper Intermediate groups to teach.  He is building up his numbers of Italian students though, so only half his lessons now are English.  It has got me wondering whether I might even have enough knowledge to teach beginners in French and German.

I got my first pay-slip yesterday.  I had not taken into account that as a foreigner I have to pay 30% tax!  Still, I’m earning far more than I am spending, perhaps by the end of August I will be able to afford a flight back to England! 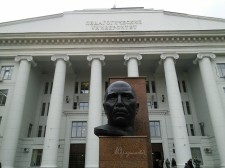 I’m still trying to take some pictures for you when I’m out and about to add some colour to the blog, hopefully I will get a few over this holiday weekend when I hope to see a lot more of the city!