Saturday night was an interesting experience.  It was Peter’s birthday so we all planned to meet up and celebrate and find a decent bar to go to (rather than the Arts Café which had been the traditional Saturday Night meeting place).  I brought along my friend, we all met up at Janelle and Brianna’s house, along with Ale and Peter, and the plan was for Lana, one of the Russian people we work with to lead us to the best places she knew about.

The first place she took us was Alaska Bar, but this was very crowded with nowhere to sit and not much to do except drink and talk, and most of us decided not to stay there.  We did a bit of wandering around trying to decide where to go, Lana said she knew a place where they would have a table free but not until after 11pm.  I mentioned a bar I had passed a couple of times that looked like an Irish bar that was not far.  We decided to get some food in Jar-Pizza, a local fast food place (the name is a play on the word “zharpitsa” – a legendary firebird).  I had lived close to it for my first month and a half but had never eaten there, so this was my first chance – and I must say I thought their chicken strips were delicious!  Their signature pizza doesn’t look so appealing close up, like all the pizza in Volgograd it suffers from the characteristics of the ubiquitous Russian cheese – too thick, too white, not very tasty.

We then wandered up to my Irish bar – which, it turned out, was the same bar that Lana had been talking about, called Harats.  I had passed it but never been inside, but it seemed lively – they had live music, they had tasty smelling food (meat platters!), and decorations with English, Irish, Scottish and Welsh flags, and posters showing many alcoholic products from these islands.  They even had a banner for Newcastle Brown Ale on the roof, which made me feel very much at home! 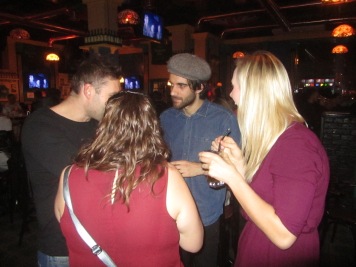 We met up with some other people from work, Peter and the others celebrated properly with multiple alcoholic drinks, and Janelle and Alessandro were making new Russian friends.  This continued on into the evening until one of my colleagues had a little too much to drink and needed to be taken home.  My friend and I volunteered, having not been drinking and, being slightly older, pretty much ready to head home ourselves.

I’m told the drinking continued after we left and in the early hours of the morning someone got locked out of their apartment, someone sustained a mystery bruise to their leg and someone made friends with a Russian gangster.  But I’m not here to spread gossip!