The city where Peter works is called Volzhsky, and is located about 20km north of Volgograd on the other side of the river (bear in mind the famous war cry “beyond the Volga there is nothing” – just thousands of miles of sand and steppes).  In the 1950s the Soviet authorities decided to build a hydro-electric dam on the Volga and Volzhsky is the city that resulted from 10,000 people moving to work on the dam, and in service industries to support the workers.

I had never been, and Peter assures me there really isn’t all that much there, but one thing they do have is an aqua park.  My friend wanted to go to an aqua park, and there is a hotel attached which includes full access to the facilities, so we decided to book into the hotel and spend a day in Volzhsky.

There are marshrutka that pass my flat and carry on all the way to Volzhsky so getting there was not a problem.  But it is a long journey, 45 minutes to an hour.  This was my first trip out of the city since I arrived and also my first time crossing the Volga.  Looking back from the marshrutka it was strange to see the Motherland Calls statue looking so tiny and so far away.

I was holding my hat in my lap during the journey but as we got off the marshrutka I made the schoolboy error of forgetting to pick it up, and I only realised as the marshrutka pulled away.  We had to wait for another marshrutka to get us to the aqua park, but the numbers we needed just wouldn’t come – we waited and waited, my head was cold… and then eventually a 123 appeared.

It took a roundabout route, but got us to the hotel, and we checked in.  I was given options for lunch and dinner, and because of our late arrival we elected to have lunch at 4 and dinner at 8.  I chose chicken noodle soup for both meals – still smarting from my experience of trying to be too adventurous at the Come In Bar.  In the event, the chicken noodle soup really was very nice. 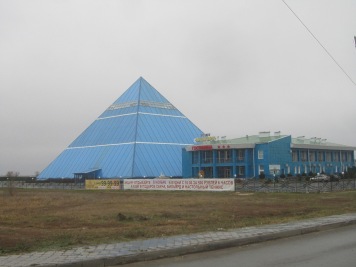 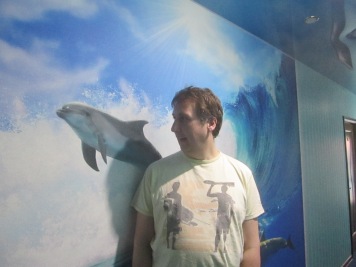 The Aqua Park was mostly closed up for winter – all the outdoor pools and slides were closed, drained and winterproofed.  But the complex had an indoor section with a decent selection of water slides, pools, Jacuzzis, a sauna, even table tennis tables.  We took full advantage of our guest-entitlement and had a great evening.  It was quite popular with families, couples, schoolkids and a few other guests, and it was nice to see Russian kids are no different from British kids when you put them in the water or show them a high slide!

I think it’s probably accurate to say that’s the most fun I’ve had in Russia!