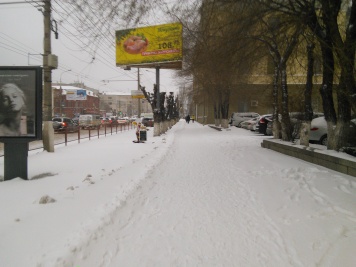 The snow came again today, hard and fast.  In the morning there were trucks dumping sand on the pavement, one poor woman got covered in sand and was hollering manically at the truck, which just carried on regardless.  The parts of pavement not coated with sand were icy deathtraps – yesterday’s part-melted ice and a fine layer of new powdery snow creating what may be the slipperiest surface known to mankind.  I have lost my footing so many times but so far… touch wood… I have stayed standing.  The sand was a very welcome sight.

But within hours all that sand, all those work hours spent scattering it over the cities arteries, all the petrol used in those big trucks, all the organisation and logistics required to keep the main thoroughfares passable, became totally redundant, as it snowed and snowed and snowed, and the sand was covered in 6, 8, 12 inches of fresh snow.

I had my own logistical challenges today.  A lesson at 9am – that’s fine, I had prepared for that.  Then an hour or so to plan and prepare my afternoon lessons, before my Russian lesson.  Perhaps a little bit of time after the Russian lesson but then I was going to be taken to the Russian Presidential Academy of National Economy and Public Administration (Volgograd Branch),  or as everyone called it, the University, to judge their phonetics competition.  I had no idea where it was, how to get there or how to get back but I was told I would be given all the information.  I had a lesson at 3.30 at Voroshilovskiy, and then two more lessons after that.

Normally I would go to the Central Office library to prepare my lessons – I know where all the resources are and I have put a few useful files and directories on the systems there to help me save time.  At other offices I have to either ask someone or trawl through directories, mostly with Russian names, until I recognise something familiar.  I thought I could save some time by preparing my lessons at the school centre.  I found some of the materials I needed for two of my lessons but could not find anything relating to the programme for the third lesson. I couldn’t avoid it, I would have to go to Central Office.  In good weather it’s only 5 minutes away, but in a blizzard it takes a bit longer.  And then I had to get all the information I needed and come back again for my Russian lesson, and I had about 30 minutes to do all of this.

I just about made it and got all the materials but decided I would need to use that time after my Russian lesson but before my University expedition to finish off the last lesson (prepare a proper plan).  Unfortunately, as it always does, my Russian lesson overran significantly (not complaining – the more tuition the better!) and I only had 10 minutes to prepare my lesson plan.  And then when I was halfway through typing it up I got a text saying one of my lessons was cancelled this afternoon, and I had another replacement lesson with a completely different programme.  Fortunately, I suppose, it was the lesson I had not finished that was cancelled.  And the replacement lesson I had taught previously which meant I had an off-the-peg plan already on my flashdrive that I could recycle.  Win!

One of the managers, Anya – I’m not sure from which office, I did not recognise her – was tasked to deliver me to the university.  She did not speak great English and my attempts to ascertain where we were going (so I could start planning my return journey) all failed… clearly I would just have to wait and see where I ended up.  We walked into the blizzard and – eventually – towards the tram station.  She kept asking strangers where it was, she later explained she never uses the tram, she always travels by marshrutka.  Given the chaos the snow was causing to the roads, the tram was a much more sensible and reliable option.  She did not realise that I use the trams frequently and knew exactly how to get to the station and if she had told me which stop, how to get there.

University of Economics and Law

Entrance to the University

It was actually about 4 or 5 stops in the direction of Tractorniy, just beyond the Mamayev Kurgan.  When we got out the blizzard was getting worse.  I almost lost my footing several times.  We crossed Prospekt Lenina and walked towards an imposing large building that I decided had to be our destination, and so it was.  Inside was a mass of students leaving and arriving, there was a metal detector and two security guards.  I went through the detector and the scissors in my bag set it off, nobody blinked an eye or asked me to stop.  I’m not sure whether that is fortunate or terrifying.

Anya delivered me to the third or fourth floor into the custody of a lady called Yevgeniya (Eugenie if you like to translate names) who introduced herself as the head of the department organising the phonetics competition.  Anya left immediately while Yevgeniya took my details down so she could introduce me, then led me to a large room full of students with a big screen at one end, and showed me my seat in the corner.  Eventually I was given some paper with a list of names – the students who would be performing.  I was to judge them on pronunciation, knowledge of the text, artistry (or delivery, as I interpreted it) and creativity – extra marks if they had a costume or a prop.

And then suddenly the contest was underway.  The first kid was remarkable, he read a passage from The Thorn Birds by Colleen McCullough which I remembered from the TV series.  His pronunciation was a bit strange but easy to understand – I gave him a 3 at first but later on after hearing some of the others I upgraded him to 4 out of 5.  He clearly knew his text well, there was no hesitation, and his delivery was excellent.  He would be the one to beat.

Most of the contestants were students at the university who (obviously) were not primarily students of English, but economics and law students who did English as a secondary subject.  The Thorn Birds kid, however, was a schoolboy – the university had invited schoolchildren from specialist schools to enter the competition.

There were a few other pieces of literature I recognised – one kid did an all-too-short section of The Raven by Poe, one girl did WH Davies’s “Leisure” – what is this life if full of care, we have no time to stand and stare…  there was a Shakespeare sonnet and a RL Stevenson dirge.  One boy had written his own piece which powerfully evoked the Battle of Stalingrad, but unfortunately his knowledge of his own text let him down and his delivery was poor.  Overall the standard was good.

After the last performance the judges retreated to the staff room to decide on the results.  Our scoring revealed we all had the same top three, but not in the same order, and when we added all our scores together the first two names were a dead heat.  Yevgeniya was happy to have two First Places so we did not have to get into an X-Factor style argument, there were still certificates for second and third.  Of course Thorn Birds was one of the winners.

After the certificates were handed out I was asked to say a few words, I made some comment on how it was nice to hear some of these familiar texts such a long way from home.  Then just before everyone left, Yevgeniya said one more girl would like to perform – she had arrived late because of the weather.  We all sat back to listen and she just blew it out of the park.  She would clearly have won the competition if she had not arrived late.  All the judges agreed and one of them must have mentioned it to Yevgeniya, because a certificate was prepared for the latecomer, and she was included in the Winners and Judges photographs.

The snowstorm outside looked amazing from the fourth floor of the university building but I would have to battle my way through it to get to my lesson at Voroshilovskiy – I had one hour to make it.  I was invited to stay and take tea and cakes with the organisers but I apologised and said I needed to get going – fortunately someone had ordered a taxi (I think, it may just have been a friend giving her a lift) and invited me and one of the other judges to join her heading back to the city centre.  I had an interesting conversation in the car with the two of them about language and language teaching – one of them worked for the Cambridge IELTS exam board. 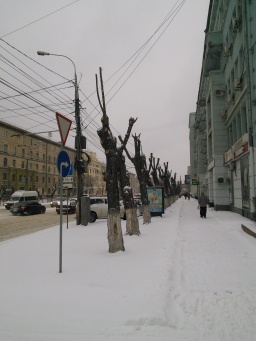 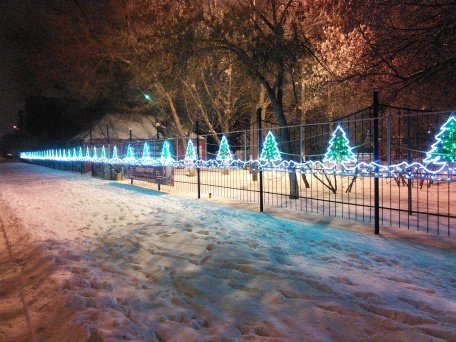 It took us about 10 minutes to get out of the car park – not an auspicious start – and I began wondering if I would have been better getting the tram the whole distance.  We did a little better when we got onto Lenina but it was slow going, and they dropped me off in the centre so I could get a tram for the rest of the journey.  I made it in time, I taught three great lessons (well two great ones, and one ok one), and spotted some new Christmas decorations outside a school I pass on my way home.  These trees are faring better than the ones along the main street which have been pruned to within an inch of their life – my Russian teacher is concerned that when summer eventually does come, there will be no shade because the trees have no branches.  Worrying about being too hot while we are in the middle of a blizzard… this is Russia.