No day off this week, instead I was asked to perform the crucial role of Santa Claus in an interactive play for young children in Volzshky today, and seeing as it was on the way, to help run the two English Clubs in Spartanovka earlier in the day.  English Clubs are generally not too difficult to deal with, but today they wanted me to dress up in the full Santa gear and stay in character throughout the two 90-minute clubs.  The beard is so ticklish on the nose. 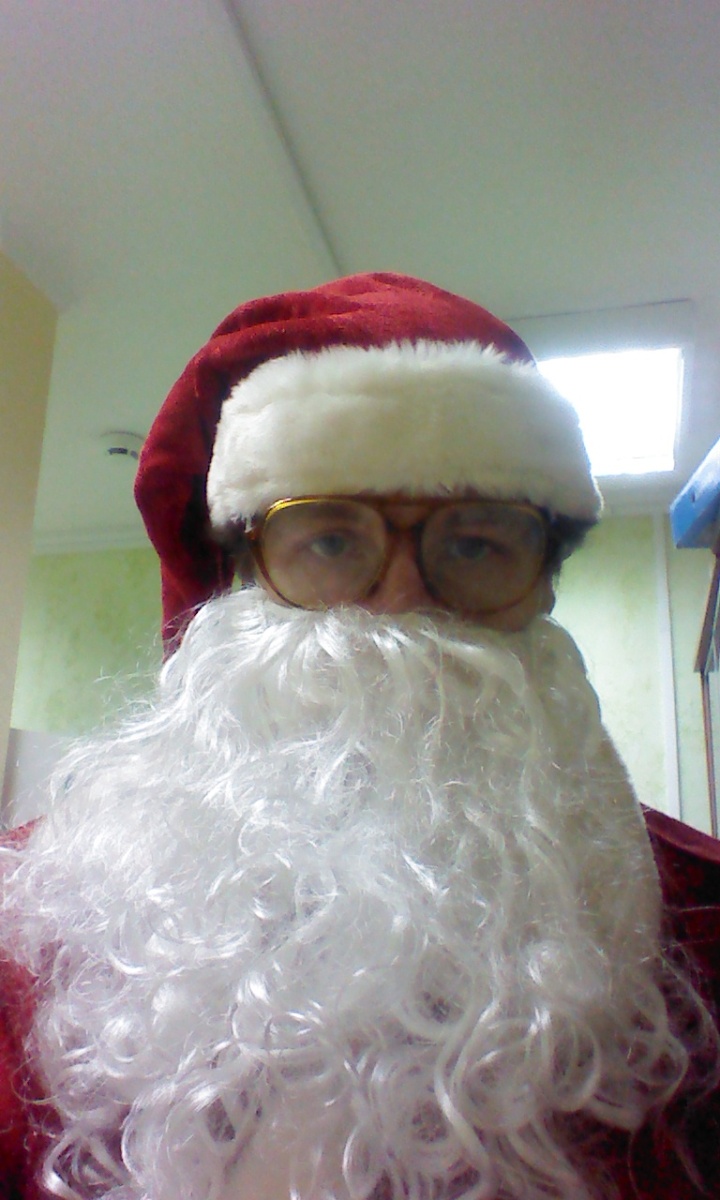 Fortunately the temperature was back to a more reasonable -3 today from a wrap-up-warm -24 yesterday, and I know the best place to sit on the trolleybus to stay warm.  The hour-long journey got me there in just the nick of time, having just missed the earlier bus.  Instead of Santa’s elves my helper today was Elvina and the young children in the first club all loved having Santa around.  At the end of the club they all wanted their pictures taken with me.  The older kids in the second club were a bit more stand-offish about it. 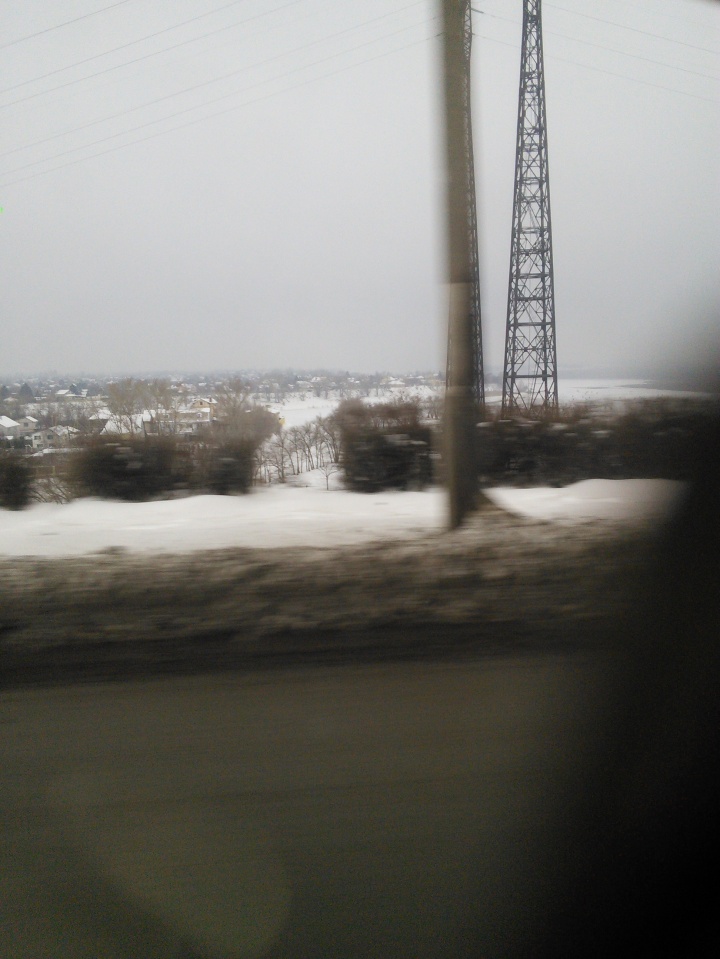 After the clubs we hopped in a taxi and headed across the Volga to Volzshky.  The river is still frozen, white close to the shore and more icy-blue in the middle.  One of the white areas was absolutely crowded with people.  “They are fishing” Elvina told me.  Ice hole fishing.  It’s a big thing here.  Her father wanted to do it, but she would not let him, it is too dangerous! 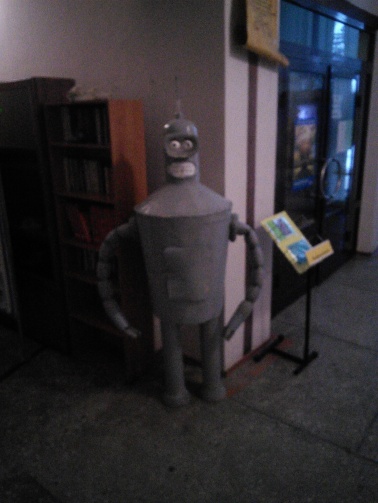 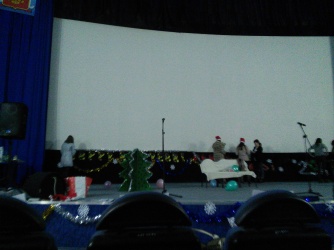 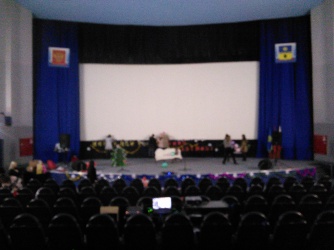 We arrived at a theatre and I was told to suit up again as Santa in the cloakroom.  Some familiar faces were here, Edward and Galina who I usually see in the library every morning.  Staff from Volzshky were still putting up decorations around the stage.  Someone I didn’t know, Olga was all green-faced as the Grinch, and Anna the organiser in yellow pyjamas as Cindy-Lou.  I was shown the cramped space behind the curtain where I would spend the majority of the show after Santa was “kidnapped” by the Grinch. 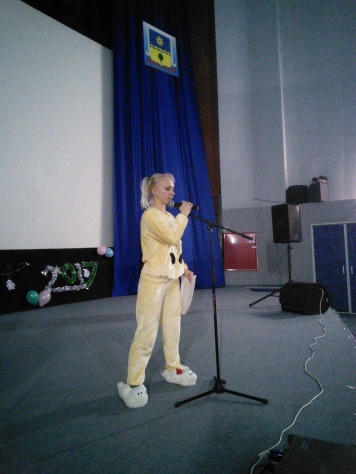 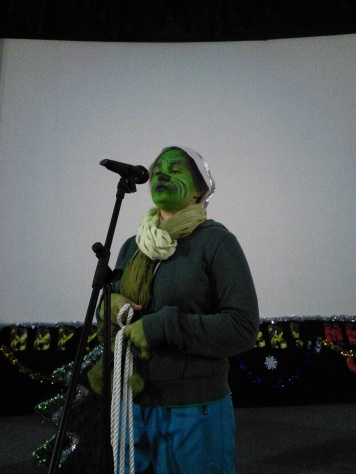 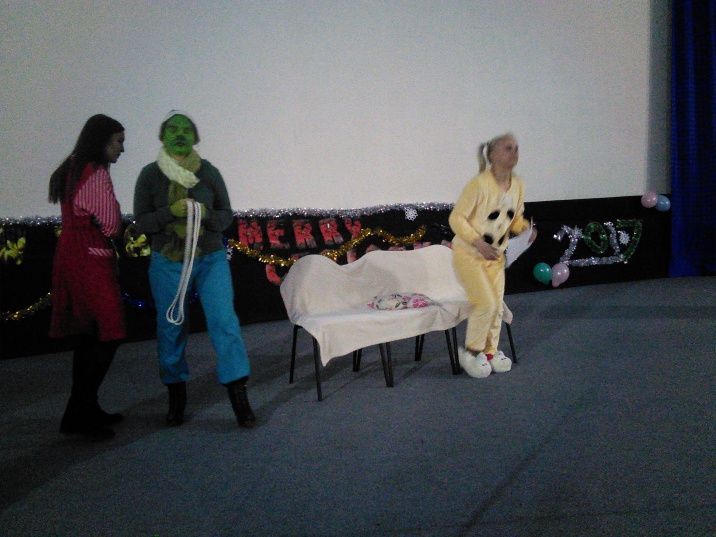 We had a quick practice and run through, checking our cues and working out where the microphones and props would transition.  And then we got the call, we took our positions and listened as the hall filled with children and parents.  I made a brief cameo appearance near the start as the Grinch kidnapped me and had to spend most of the following hour behind the curtain listening to children running onto and off the stage and several different songs and games.  Without wanting to spoil the ending, Cindy Lou persuades the Grinch to return Santa’s things, and eventually Santa by engaging in English Language exercises with the Grinch.  Entertaining and educational, see!

Eventually they let me out, I had to pretend to be angry and sad while everyone sang songs to cheer me up.  And then I got to give everyone presents!  All the children came down to collect presents from Santa or one of his helpers (I had a few).  I don’t think they really noticed or cared about the presents, they all seemed to be staring at me in awe.  It was quite a nice feeling.

And then, again, the photographs.  Every parent wanted their child photographed with Santa, most of the children were happy to go along with it though there were one or two refuseniks.  I started off just standing in front of the stage, then I began kneeling as all the kids barely came up to my waist, and then we retreated onto the stage and the chairs so the kids could sit next to me (or between me and the Grinch and Cindy-Lou).  It seemed to last longer than my part in the show! 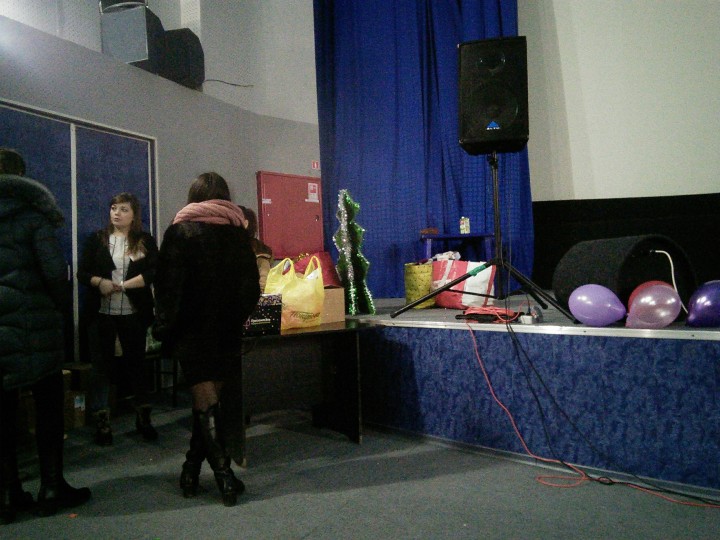 Eventually the last children disappeared and I was able to remove the itchy beard.  There were four of us going back to Volgograd so my concerns about getting home were allayed.  While we waited for the taxi, we spotted a black and white and orange cat that had taken up residence in the theatre.  It seemed scared of most of the people who tried to greet it, but it came up and let me rub it’s head and stroke it, and eventually it climbed onto my lap, and then my chest and snuggled in.  We had to wait a while for the taxi so this was quite a nice way to spend the time.  I was sorry to say goodbye to it!