What used to be known as Christmas Day to me today was an ordinary Sunday, at least until 3pm when I was supposed to meet my work colleagues on the Embankment.  I had paid 1000 roubles for the right to go to the party (50% of the per-head cost) so I was committed to going even though I knew there was a very small chance I would like the food, or understand anything that was going on.

I was a little late for the meeting, which was meant to be a big company photograph, I arrived just in the nick of time to squeeze in at the back.  Then we all headed into the venue, a place called Deja Vu (I was sure I had heard of it before… buh-boom!). 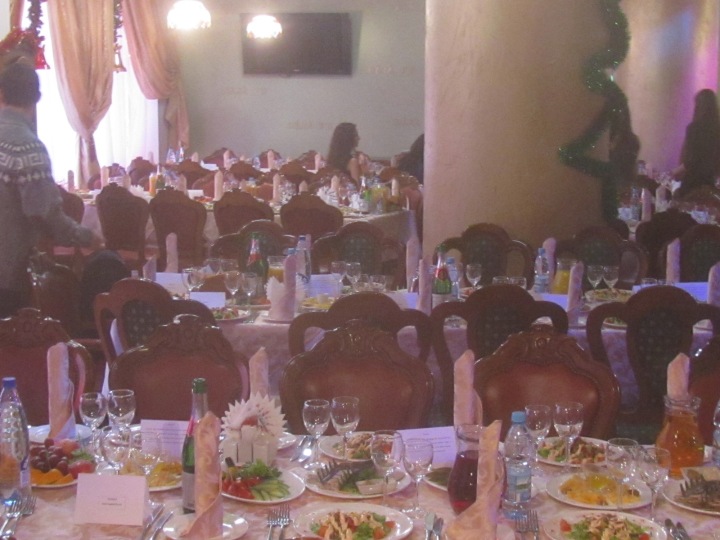 They had a cloakroom to leave your coat and a big room lined with tables, in traditional Christmas-Party fashion the world over.  People from every office were represented, and many of them spotted me and said hello.  After I handed in my coat, Edward, who seemed to be organising the logistics of seating everyone, parked me in a corner area with a few soft furnished seats while he worked out where all the other offices were going to be sitting, and while everyone else filtered through the cloakroom process.  It took ages, it seemed I was sitting there for tens of minutes.  John, the American teacher, and Alexei, the Russian teacher who teaches Chinese, also seemed to be spare wheels with me, though John was a lot better at mixing and mingling.

I was eventually joined by Galina (the librarian, and the evening’s MC) and Michael (our methodologist) asking where I would like to sit.  I politically expressed no preference, just put me wherever is convenient.  Of course that meant I ended up sitting next to Michael, and a new teacher I had not met before, Boris (a Russian who teaches English).  Also on our table was the girls from the main school building in the centre, but there was a bit of a gap between them and us men on the end. 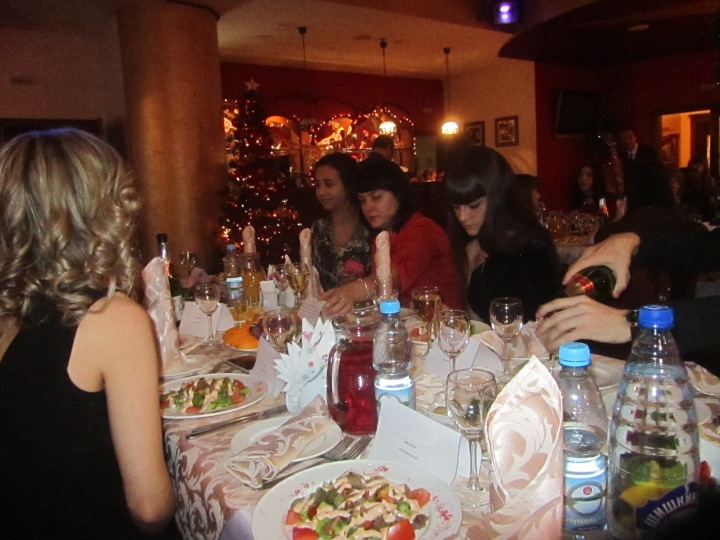 Directly behind me was the bosses table, and specifically Anna Markovna.  On my right was the Dzherzhinsky contingent (including Cindy-Lou herself, Anna O).  Diagonally behind me were the outliers from Volzshky and Spartanovka.  The next table along from ours housed my regular colleagues from Voroshilovskiy and Sovetskiy, joined by John.  At the far end were more outliers, Tractorniy (including Nina and my new Grinch-friend Olga), and Krasinarmeiskaya, the Red Army district.

Other than John and I there were no foreign teachers.  Guy and Jorge were spending Christmas Day with their partners, Alessandro was packing up to leave tomorrow, and Stephen from America had decided that 1000 roubles was a bit too much for him.  I wasn’t sure where Peter was but he eventually arrived halfway through proceedings.

There was a salad waiting for everyone on the table when we arrived, covered in pink dressing.  Apart from the pink dressing, the mushrooms and the salad, I might have been tempted.  It seemed like nobody was willing to start eating until Anna Markovna arrived, but it was the Dzherzhinsky mob that broke first and started munching long before everyone else.  Eventually the rest of us joined in – even I found some bread slices and some cold cut beef to nibble on.  Boris seemed a bit upset by the absence of any alcohol – there was champagne on the tables but he didn’t think that counted.

Eventually Anna Markovna made her entrance, and the proceedings began.  Galina introduced Chronos, the god of time (Anna’s son/partner Viktor) to introduce a “time machine” so we could look back at the school’s 10 years of history.  The pattern was a recap of events in a particular year (new offices that opened, special events that were held) and then each office in turn would do a little party piece.  Dzherzhinsky did a dance routine, Voroshilovskiy had Artem’s song, Sovetskiy had a little video in which I played a small but important role.  Spartanovka did a weather forecast comparing weather events to predictions for the school in 2017.  Krasinarmeiskaya sent up one of their staff to do a Roxette song.  There was even some salsa dancing featuring Lana from Sovetskiy, Vika from Dzherzhinskiy and Anna from Volzshky.

Anna Markovna gave out some certificates to Anna O and Kate from Voroshilovskiy for their contributions (much deserved) and also certificates to yesterday’s Grinches, Olga and Maxim.  There were also a couple of games – a miming version of Chinese Whispers and a race to see who could tie the most knots in a ribbon.  Between each few segments, they cleared the dance floor and played some loud music so people could dance.

I was enjoying the performances and the pictures and videos, but I couldn’t understand any of the words, I had no interest in the food, and I was still in a rather isolated position with only Michael and Boris to talk to – although Peter came up for a little chat after he arrived, and one of the Dzherzhinsky managers also came to talk with me and check I was ok.  I did have a bit of a catch in my throat and kept coughing and was a little worried I might be getting another cold.  As we approached 8pm, with all the offices having done their presentations, I decided there was not much point in sitting there in confusion for the rest of the evening, so I told Michael I would head off home, to get some rest for my lessons tomorrow.  I let John and Peter know I was leaving, and slipped away.