My last week of 2016 was in reality a bit of a wind-down.  Many lessons were cancelled, some of the lessons I had were special festive lessons, outside the programme and a bit easier to plan and teach, and everyone was in a good mood.  I even got presents/cards from a couple of students (but if you had asked me to guess which students I wouldn’t have been able to predict!).

My very last day still had a crazy transition between central office and Voroshilovsky where my colleague Kate had encouraged my class not to miss Friday’s lesson because “Stephen has something really special planned!”  I didn’t, but the less classes we get cancelled the more money the school makes…

I arrived at the central office to find no students, but all the staff members having a full-on party, with wine, not just juice.  They all encouraged me to join them and I had to explain I had classes.  But if my students did not show I would join them.  In the event one out of the 4 turned up so I had to do the lesson instead, but it was a nice lesson.  Both my students turned up for the following lesson, and at the end I had to hurry to Voroshilovsky.  I was a little bit late, when I arrived only half my students were there, but they were the three most pleasant students.  To try and live up to Kate’s promise, I had decided to do the special Christmas lesson, and I had brought party hats.  They liked the hats (they all took them away with them at the end of the lesson!) and the lesson had an end-of-term feel to it.

So I went home, knowing I had the rest of the evening, and the whole weekend without any lessons to worry about.  I had also been informed of my activities the following week – I will be doing City Camp on Monday, Wednesday and Friday, which will only last from 10am to 1pm each day, so quite an easy schedule.  Exactly what I will be doing – teaching, running groups, supervising… I guess I will find out on Monday.

The next day was that rare thing, a Saturday where I did not have to get up early to work.  I enjoyed the lie in and did some household chores.  I didn’t have any specific plans for the New Year, Peter had said he would come over from Volzshkiy and we would go find some fireworks or something.  John ended up making his own plans with another friend, and Stephen was out of town.

At about 7.30 I went out to meet up with Peter.  It felt very cold even though it was only -2 or -3, we checked out the Embankment which was very quiet, Pyramida which was closed apart from the supermarket, and a place he had been before where we could get warm drinks which turned out to be closed.  Cold and out of ideas we just went to the Arts Café, the default Saturday night meet-up spot, and had a coffee/hot chocolate (Peter couldn’t drink alcohol because of medication, and I don’t anyway).  We sheltered there for a couple of hours and then at 11.30 we headed for the Square of Fallen Heroes to see what was going on.

There was a stage set up, when we arrived it had a dancing snowman, a Father-Christmas-Father-Time hybrid, and a couple of more human-looking figures.  The square was… well not exactly full, but there were maybe 500-700 people there.  Many, perhaps most of them seemed to be foreigners, Indians maybe.  There were a lot of families with small children, all wrapped up warmly.  There were concession stands selling Christmas tat and popcorn.  The whole area was fenced off with security barriers, checkpoints, metal detectors and guards – it seemed a bit overkill, to be honest. 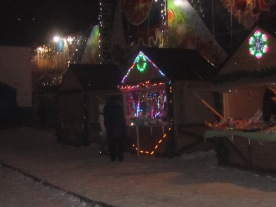 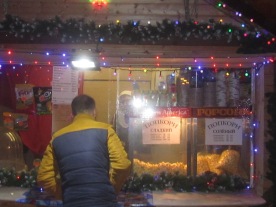 People were mostly just milling around, watching the stage where there was some silly dancing.  Fortunately it was only a few minutes to midnight.  Then suddenly all the figures on the stage stood straight, still, to attention, as a voice crackled through the air.  Peter informed me it was President Putin giving his new year message.

It seemed to go on a while and then suddenly everyone was moving again and there were bells… I wondered if that was it?  No- they were going to do a count-up.  Not a count-down to zero, a count-up.  I joined in from 6 onwards, thinking it would stop at 10 but it went on to 11… and then on 12 everyone went crazy.  I guess midnight must be on the 12th bell here, not the first like in England. 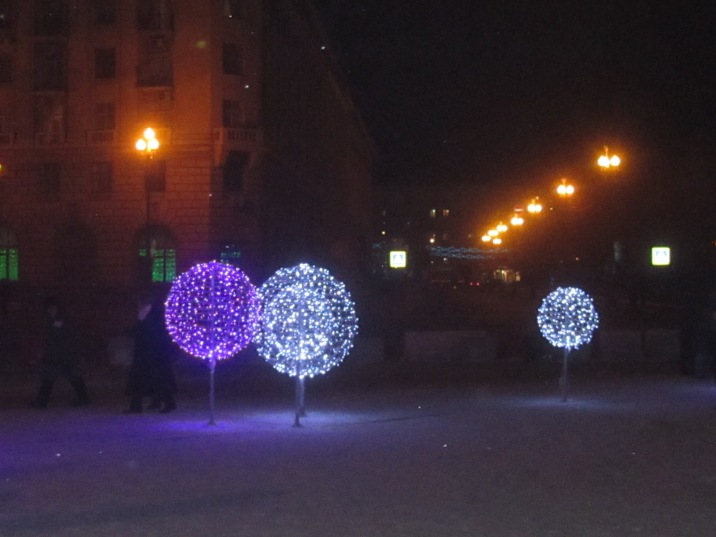 I’d love to say fireworks went off all around us, they kind of did, but only in the sense of one over there…. then another one over there…. then another one a couple of minutes later.  They weren’t the most spectacular fireworks either.   Most were just people in the crowd letting off glitter bombs or roman candles.  It was not like the spectaculars I have seen in London or Sydney.

Then the party started.  There were dancers on the stage, dancing with sticks full of lights and, occasionally, fireworks.  There were rapping babushkas.  In the crowd people formed giant circles and danced round very fast.  One group of three young Russians made a small circle and span quickly, it was amazing they didn’t fall over (the ground was still covered in snow).  Some of the Indians were running recklessly through the crowd, people had to jump out of their way.  More fireworks were going off, in the middle of crowds of people.  It seemed to be all the things they tell you you’re not allowed to do at similar events in the UK! 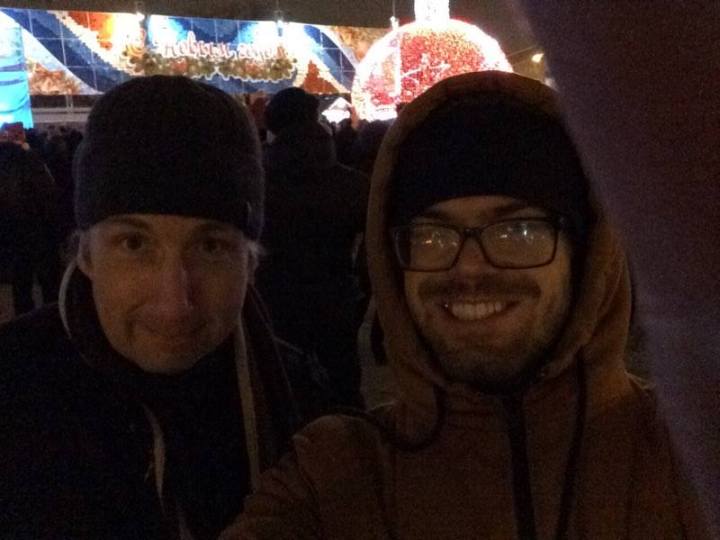 I was trying to take pictures and film but my fingers kept going numb, it felt so cold.  I could barely handle my camera.  I got a few bits and bobs, and Peter got a selfie with us both.  Peter had a long journey back to Volzhskiy, and if I didn’t want to get a taxi (I didn’t) I would have a long walk back to Voroshilovskiy, and we were heading in opposite directions, so we wished each other a happy new year and went on our respective ways.