My final full day in Moscow started with an early start to see the Novodevichy cemetery which we had briefly passed on the bus tour.  We left before breakfast at the hotel and ate at a small cafe near the convent.  Then we walked around the convent.   Despite a little snow on the ground it was a bright, sunny morning.

We then entered the cemetery and looked at the map to decide which graves we wanted to see.  For me the most important ones were Anton Chekhov, the great playwright, and former leaders Yeltsin and Khrushchev.  I also wanted to see the graves of Prokofiev, Shostakovich and the film director Sergei Eisenstein. 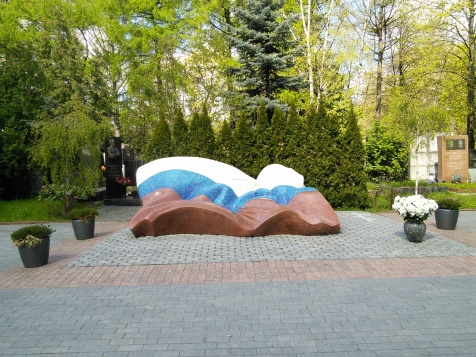 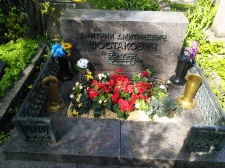 Janna found her own selection of great writers and actors, though a couple were known to me – writer Gogol and the famous clown Nikulin.  I also found Oleg Eframov, an actor who I had seen in a film on a previous holiday.  It seems most of the great and good of Russia are buried here, if they did not make it to the Kremlin wall.  Other great writers are buried in their own cities, of course, and most tsars in St Petersburg.  Interestingly, Stalin’s wife and children are buried here.

We stayed a couple of hours and then moved on, with our next stop the Kremlin​.  It is possible to get behind the walls as a tourist but we had been stymied on previous attempts due to erratic opening times.  This time we beat long queues because we were not connected to a tour group.  We went up the walkway…

And through the gate…

Into the Kremlin complex.  Of course this is a working government building and there are many policemen there to keep the tourists in their place with insistent whistles, I got one myself for walking into the road to take a full size photo.

There are, surprisingly, mostly churches and cathedrals inside the Kremlin, all survived the atheist Soviet regime. 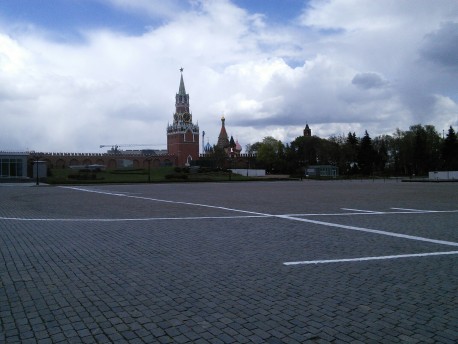 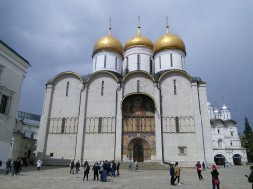 The Cathedral of the Assumption

Cathedral of the Annunciation

The Cathedral of the Archangel 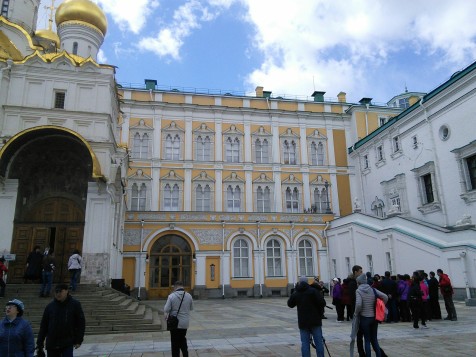 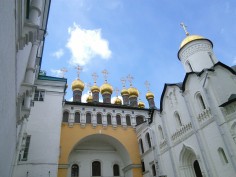 The Cathedral of the Archangel (from the gardens)

There is also a broken bell and a cannon that doesn’t shoot, but they are pretty impressive nonetheless! 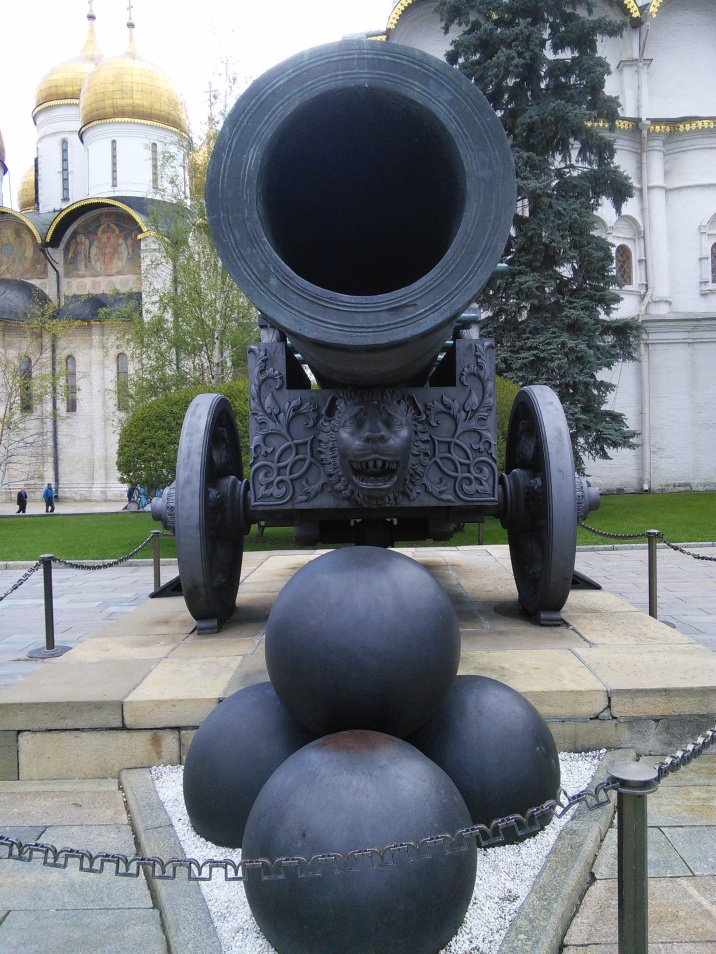 There are also some beautiful gardens, and views across the river.

I tried to check out the Necropolis after we left the Kremlin, but it was still closed because of the parade celebrations, with seating erected along the walls.  Here lies Lenin, Stalin, Brezhnev, Dzherzhinsky, and the first man in space, Yuri Gagarin.

Next, we went down to Gorky Park, a riverside green space with fountains, walkways, gardens, cafes, lots of stuff.  In winter you can skate along all the walkways.   Today there were not many people here. 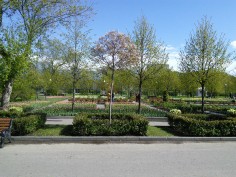 We debated whether to go to Tsaritsyno Park next or go see the Olympic stadium, the Luzhnikiy.  I have been to four Olympic stadiums and wanted to add the 1980 Olympic venue to my tally.  We set off along the river, Gorky Park is quite long so there was lots of public art and architecture to grab our attention on the way. 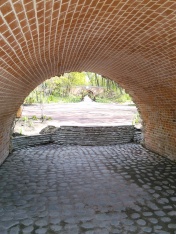 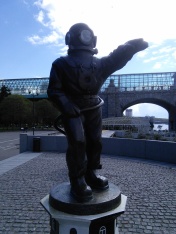 Eventually we crossed the river and approached the stadium.  But it was in the middle of a building site!   They are preparing for the 2018 World Cup and the Final will be held here.  However we were still able to get quite close to the stadium, the builders didn’t seem to mind as we walked through the fences and piles of rubble and half-completed fountains, and I got my photo!

We then hopped on a train and headed to Tsaritsyno.  I must admit I had been a little underwhelmed by Gorky Park, but the sight of Tsaritsyno restored my image of the Russian romantic dream.  Beautiful fairy tale towers poke out from trees at the top of a hill.  Below, a path leads down through a green meadow to a lake across which birds glide gently.  An island on the lake is connected by two arching bridges.  On the island is a pool full of dancing fountains.  Classical music fills the air and the fountains dance in time to it.  Everything looked perfect!  I fear my pictures cannot do the scene justice. 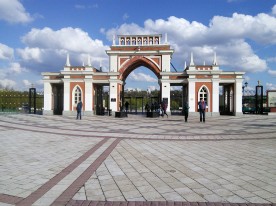 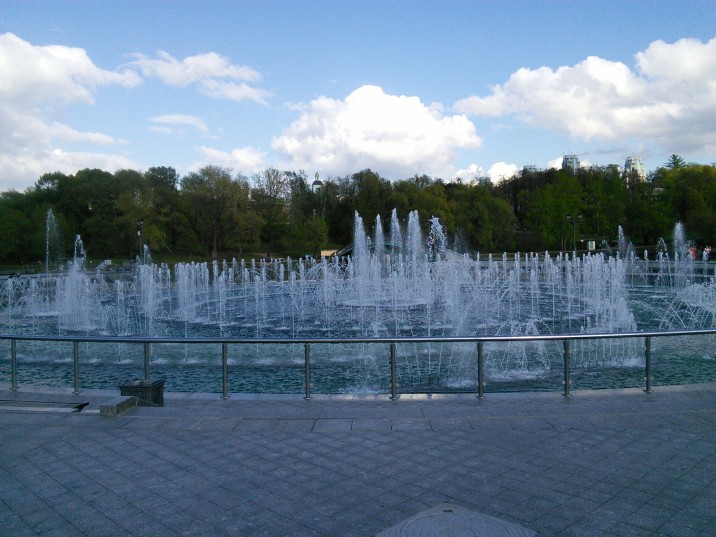 And then we walked up the hill to the palace!  Intended to be used by Catherine II and her courtiers it fell into disuse when she died and was not finished until a restoration project in 2007.  There is a church, many decorative walls and bridges, and now a museum. 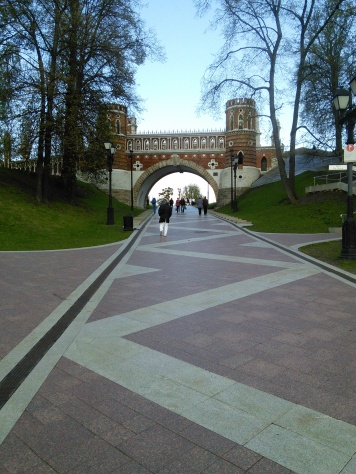 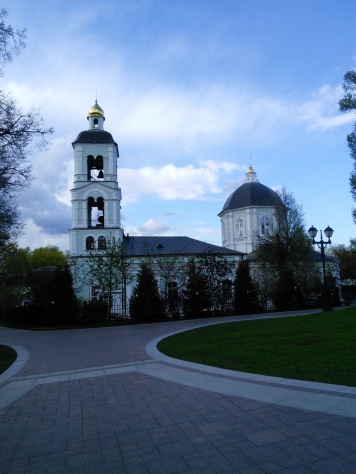 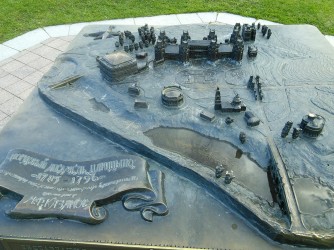 Sculpture of the architects

We finished the day with a trip to a giant shopping centre then a return to Torro Grill where we ate our first night, delicious again.  A beautiful day full of beautiful sights.

One thought on “Moscow: Day 6”