Having agreed to extend my contract with my school in Volgograd for another year, and my current contract in its final month, with plenty of unused vacation time, and most of the school’s students on holiday, it was definitely time for some rest and relaxation.  And I had plans, big plans!  I was going to go East – destination Vladivostok.

A couple of years ago I went to Australia for 3 weeks, having meticulously planned every detail of every day’s activities for almost a year in advance, carefully budgeting, costing, researching, and making decisions about things I just couldn’t really afford to or have time to do.  This holiday was thrown together in a couple of weeks, with just a rough draft in my head.  I had no idea what there was to do in the places I was going, I just wanted to go there and find out.  It could have been a disaster.  But it was a really great experience.  I bought tickets in advance working my schedule around the cheapest flights, and one of the things I was most pleased about was my outbound flight.  I would fly from Volgograd to Moscow, wait 4 hours then fly to Irkutsk, wait another 19 hours, then fly on to Vladivostok.  The long stopover was both a way to get a less expensive ticket, but also an opportunity to see Lake Baikal, one of Russia’s most beautiful and impressive natural features.

Flying over a river, which one? I don’t know.

Inside the shiny new plane

The flight from Moscow had an auspicious start, we were informed that we were the very first passengers on a brand new Airbus fresh from the factory in Toulouse.  I spotted the cabin crew taking pictures of us through the curtain when we were all supposed to be asleep!  I watched the sun setting twice as fast as normal through the window, as we were speeding away from the sunset in the west.  I tried following our progress on my tablet’s offline Maps feature, sometimes the geolocation facility works even without internet.  I’m slowly getting to grips with Russian geography, as we flew over, or close to cities with familiar names; Vladimir, Nizhny Novgorod, Kazan, Perm, Ufa, Chelyabinsk, Yekaterinberg, and Novosibirsk, the gateway to Siberia.  Occasionally I saw clouds glowing orange and realised they must have city lights underneath them.

The shiny new plane, after getting off the transit bus

By the time we landed in Irkutsk it was light again, 5.15am.  I spotted one of my fellow passengers taking a picture of the new plane and kicked myself that I had forgotten to do that before I got on the bus.  The airport seemed quite small and outside it was cool with a bit of spattering rain in the air.  I found the bus stop and waited with various other people for the first bus.  Eventually a number 20 marshrutka arrived and I hopped on board.  Unlike in Volgograd it seems in Irkutsk (and it turned out, everywhere else in the East) you pay when you get off, not when you get on.  Oddly the fare was 21 roubles for every journey, not the roundest of numbers but still only 3 coins if you are prepared.

I had some maps and some idea of where I wanted to get off but I had no idea where the marshrutka was, and in the end I got off a couple of stops beyond where I had intended.  It didn’t matter, it was still very early and I had plenty of time to explore Irkutsk a little before trying to make my way to the big lake.

It seemed to me Irkutsk was a very wet city.  Giant puddles covered main roads, with vehicles aquaplaning through them, and pedestrians had to leap out of the way of the splash waves.  My main point of reference was Kirov Square, easy to spot on the map and to navigate from.  This was a large park with fountains, flowers and a Tourist Information hut, though it was too early for it to be open. 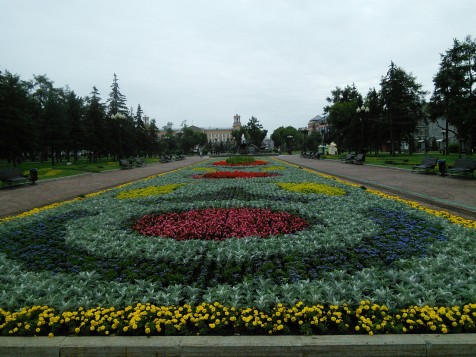 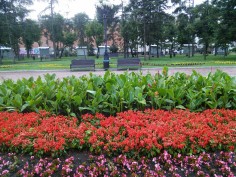 I walked around a bit and found my way to Karl Marx Street, the main historical street with many pre-Revolutionary buildings and sites of historic interest.  There were some strange statues, plenty of things worth photographing.  There were many old buildings made of wood which survived from the cities frontier days.  There weren’t very many people around, which I found surprising even at 7 or 8am. 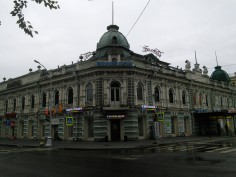 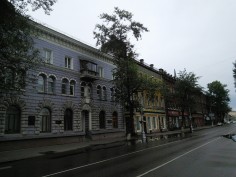 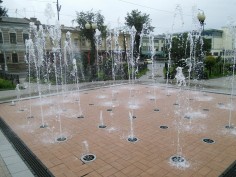 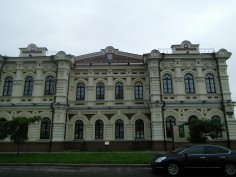 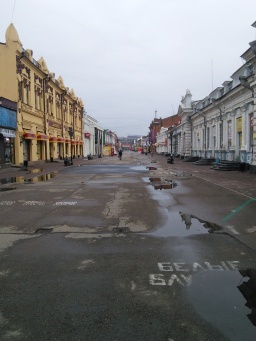 Statue of Kuibyshev, revolutionary and statesman 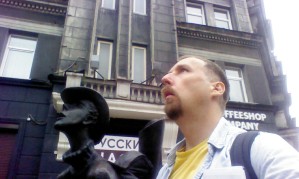 Weird looking guy in the middle of the street. And a statue.

Eventually I got myself to the bus station and managed to use my limited Russian to order myself a ticket to Listvyanka.  The cashier seemed surprised that I wanted to go there.  The reason I wanted to go there is it is about the only place on Lake Baikal which you can get to and back from within a day on public transport.  I had asked for a return ticket but so far as I could tell from looking at it, it didn’t say anything on the ticket about it being return.

Church of the Transfiguration

My bus left at 8.30 and I still had some time to kill so I wandered to a nearby church (The Church of the Transfiguration), which was opposite an orphanage for girls.  There was some English information about the orphanage, it was funded by a wealthy patron and trained its residents to be able to seek work as governesses and maids, vastly improving their prospects.

I wandered back to the bus station and saw a minibus that looked like a likely contender for my ride.  No-one seemed to be getting on board, I wondered if I might be the only passenger?  I showed the driver my ticket and he told me where to sit, and almost as if everyone was waiting for someone else to go first, suddenly there was a queue of people jumping on board.  I tried asking the driver if my ticket was return but he was too busy trying to check everyone else on board, so this remained a mystery.  I ended up having to move seats so he could put a family together, and I was sitting next to a middle-aged Korean woman.

We set off, most of the journey was on a long straight highway that rolled up and down over a hilly landscape.  A few times we got to see the Angara river, which flows through Irkutsk and into Lake Baikal, the scenery looked spectacular but I must confess that after flying all night without sleep I was tired and spent most of the journey dozing.

I shall tell the story of Listvyanka in my next post…