To understand why I came to Birobidzhan, a large town in the Russian Far East, it will be necessary for me to explain a little bit of history.  Birobidzhan is the regional capital of an oblast (region or state) that was set up in the 1930s, primarily to be a homeland for Russia’s Jewish population where they could enjoy a degree of autonomy and freely celebrate and practice all the traditions of Jewish culture – with the rather crucial exception of their religious faith.

The idea was that Jewish intellectuals had been a driving force in the revolution, and that while the Soviet Union was an atheist society and religious expression was strongly suppressed, Jews as a people had a rich history and culture and deserved the same rights and freedoms as other ethnic minorities across the country.  But while most of these minorities were very clearly tied to a specific geographical location, the Jews had no homeland.  This was before the State of Israel had been founded, and the idea of Zionism and its religious underpinning was not favoured in the Soviet Union.

At the same time, the Bolsheviks were trying to control a vast country and protect its borders from external threat.  Some areas very distant from Moscow and very sparsely populated were especially vulnerable.  Someone in Stalin’s administration found a way of killing two birds with one stone by establishing a Jewish homeland along one of the permeable borders with China.  Thus, in 1928 a decree was issued setting aside land along the Amur River for Jewish settlement, and in 1934 the Jewish Autonomous Oblast (JAO) was formally established.  The town of Birobidzhan was started by early settlers in 1928.

It has been described as a Jewish homeland with no Jews.  In fact about 2% of the Oblast’s population are Jewish and the figure is growing now that religious freedom is permitted.  Stalin didn’t help matters by persecuting Jews specifically for exercising the very freedoms for which his administration had set up the JAO.  When the Soviet Union collapsed most of the remaining Jewish population of the JAO immediately emigrated to Israel.  Having visited Israel myself, and being fascinated by this idea of a Jewish homeland in Eastern Siberia with so few Jews, and also happy for an excuse to travel on the Trans-Siberian Express, I included Birobidzhan in my travel plans.

On leaving the station the Jewish character of this town is immediately in your face, with a giant sculpted menorah standing in a fountain in the adjoining square.  Nearby is a statue of a Jewish peasant driving a cart, possibly a dairyman like Tevye from Fiddler on the Roof. 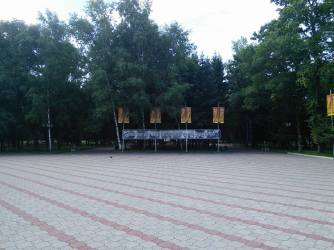 It was only 11am, I had a hotel booked for later, but once again I needed to kill a few hours before I went to check in.  So I started exploring.  I found the memorial square with stone walls listing hundreds of names of soldiers who gave their lives in the war. And I wandered along a street named after Sholem Aleichem, perhaps the most famous writer in Yiddish, and found the Jewish Friendship centre, with a dreid and a holocaust memorial marker, and several other old buildings, many of which had inscriptions in Russian, Hebrew and English. 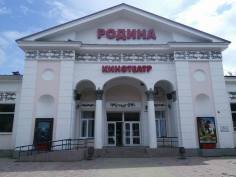 There were many beautiful and obviously well-cared for monuments, the Jewish community here may be small but it is valued and it is influential.  There were a couple of small temples, and a synagogue less than 10 years old.  I saw several schools and play areas, a good sign that the city is thriving and growing.  Scattered around the town were little cartoon-like sculptures of traditional Jewish musicians.

I made my way back from the historical area towards my hotel.  I did not see any western style shops or restaurants, this was very much a traditional Russian town.  I came to a large market area.  There was a small mall – with fashion and jewellery shops, but hardly any customers.  Opposite the mall there was a big open-topped building housing the market, with different areas for fruit and vegetables, meat and fish, clothes and consumer goods.  I walked around, I found somewhere where I could buy a drink, and sit for a while and watch the world go by.  It began to rain as I did this but it was a hot day and the rain was welcome.

Eventually I headed for my hostel – although I had paid hostel rates, I was actually shown to a private hotel room complete with en suite bathroom, TV, even a mini-bar!  After my long journey and a few hours of walking around it was a delight to sleep in a comfortable bed with a thick, soft mattress, in complete privacy! 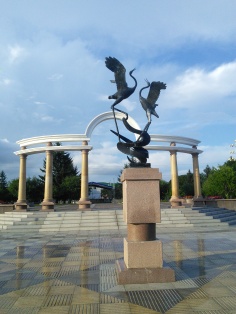 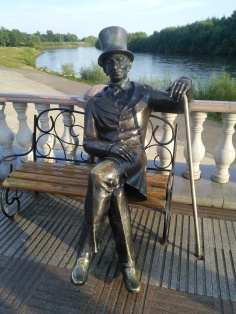 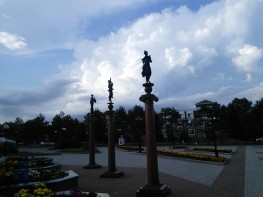 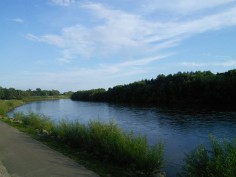 I managed to rouse myself while there was still daylight left and wandered down to the river.  Birobidzhan sits on the Bira river and it is a beautiful, slow-flowing picture.  There is a promenade along the river, there are sculptures, places you can sit, flower beds, it is very beautiful.

I had read that there was some kind of “nature reserve” further to the west and I resolved to find it.  All I found were buildings and streets.  There was an entertainment centre, with bowling.  There was a Chinese restaurant.  I found a nice little canal with a view of the TV mast on the hill that forms the city’s coat of arms.  But no nature reserve.  It turned out this was just an administrative building – and by the time I arrived it was all closed up.

On my way back I stopped in a little supermarket and bought some supplies, including a packet of noodles like I had seen the family eat on the train.  I had seen a restaurant that sold fries and chicken in the market area but I wasn’t sure if it would still be open, so I wanted a back up plan so I would not be hungry in the morning.  In the end the restaurant was still open but I decided to try the noodles anyway.  They were really nice!

I slept well again but had to get up very early for my train to Khabarovsk.  I checked out of the hotel and made my way to the train station in plenty of time.  I realised I had missed taking a picture of the statue of Sholem Aleichem – it was supposed to be in the market area but I couldn’t remember seeing it.  I checked my tablet to confirm the location and get a walking time, and calculated I would still have time to get there and back before the train came!

Thankfully I made it without any difficulties.  It is a very interesting statue and Aleichem, who died in 1916 before the Revolution, and long before the Jewish Autonomous Oblast was founded.  He was the writer of the stories of Tevye the Dairyman that was later turned into a successful musical “Fiddler on the Roof” and described what life was like for poor Jewish peasants in turn-of-the-century Russia.

My train was supposed to arrive at platform 17 but I could not see any signs showing where that platform was.  In the end I used my normal tactic of waiting to see where everyone else went when the announcement came.  We ended up on one of the flat areas between the railway lines.  My train pulled in and I found my carriage and waited for the conductor to check us on.  I was a little concerned because when booking, the ticket had somehow mixed up my first name and surname and I feared the conductor might say the name didn’t match my documents.  My fears were compounded when the woman in front of me had to produce birth certificates for the children she was travelling with!  Thankfully, when I handed the conductor my ticket he just scanned it and waved me on without even looking at my passport!  Perhaps they treat Western visitors as VIPs?

This time I didn’t have a cabin, just a seat for the short 3-hour trip to Khabarovsk.  The seat next to me was empty so I scuttled across to bag the window.  This time I could watch the scenery as the train travelled through the countryside – it did not seem hugely different to fields and meadows and forests in England or France.  There were many white birch trees, lots of grass, a few shrubs and bushes, only the wild-growing rocket flowers suggested we were in an exotic part of the world.

Soon enough I saw the silhouette of Khabarovsk on the horizon – almost the final leg of my journey to the east.  Another station, another city, another hostel, and another blog post!