December was a busy month.  I was called upon for extra duties as Santa Claus in Christmas parties and Christmas clubs which involved working on Sundays.  While I was given a day off in lieu for each, the first day off was the preceding week and the second the following week, so there was a period of 14 days in a row from 14th – 27th December when I was getting up early and working every day.

This included Christmas day when I had 6 lessons starting at 9.00am.  I did find the treadmill routine quite difficult and skipped the company Christmas Party (on 24th December) this year to take at least a little extra rest time. 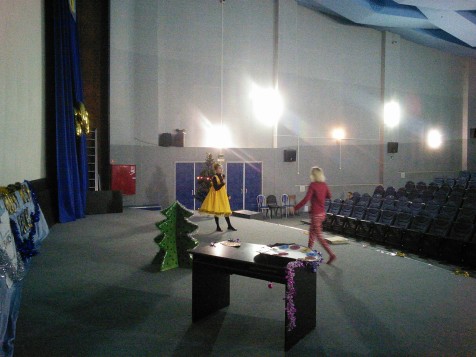 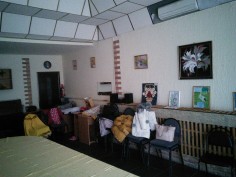 The Theatre Cat from last year!

The Clock and the Lamp 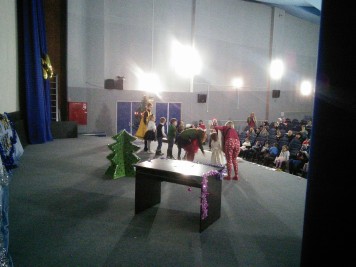 My view from backstage

The parties and clubs were quite fun and I enjoyed playing the role of Santa.  The big Christmas parties were held in large theatres in Volzhsky and central Volgograd, with dozens of children aged 3-8 in the audiences, I (dressed as Santa Claus) got to give them all presents (various gift boxes of candy).  The shows were an interactive theatrical performance featuring hyperactive organiser Anna as Santa’s alarm clock, frustrated because no-one is paying attention to her, and a magic lamp played by another teacher who shows her the true meaning of Christmas, with the help of all the children in the audience and various songs and activities which they have learned during their lessons with the school.  Of course Santa appears when the alarm clock reaches midnight! 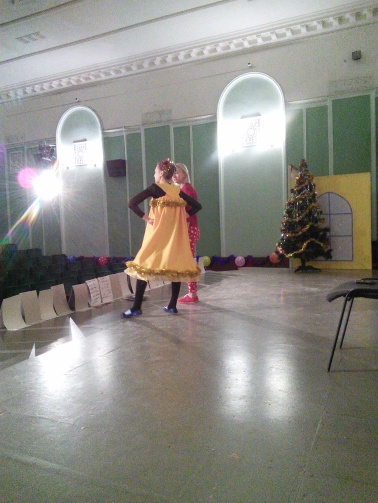 The Lamp and the Clock

Model for “Make your own Santa” 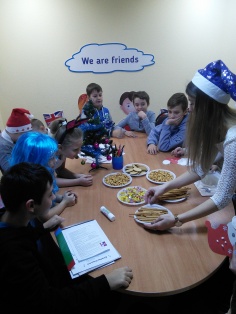 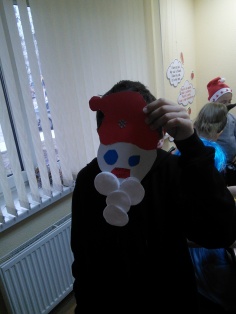 The clubs were slightly different, taking place in school classrooms at Traktorniy and Spartanovka.  The managers wanted me to dress as Santa Claus again so I did the clubs in character.  Most of them were with small children who were excited and delighted by Santa (though the ones from my own classes all recognised me!) but the last club I did was a bit strange, it was older children, teenagers who were not students with the school yet, so it was a kind of marketing exercise.  Thankfully they played along with the idea that I was the real Santa Claus and even joined in singing the Christmas songs we did!  The managers were very happy with the club! 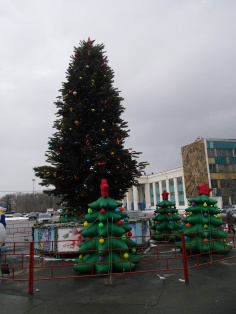 The next week, a decorated Christmas tree!

The weather this December has been milder than last year (when we had snowstorms, and snow that stayed until the end of February).  We had some snow, Christmas here was white, but it has all melted away now and the temperature is hovering just above zero most days, quite mild for a Volgograd winter.

I guess this is a tree? 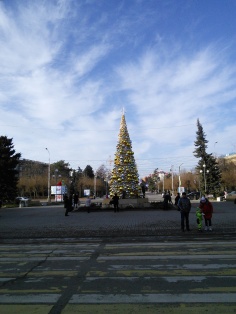 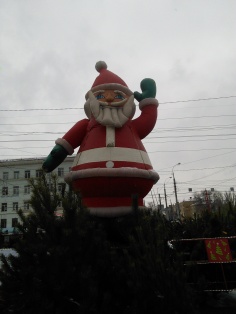 The foreign teachers are planning a New Year party.  We had a party at Francesca and Mauro’s new apartment a month ago, they made pasta and had cake, and Roman and Artem from the office came along – the new International Department guy and the IT guy.  I also had my first real conversations with Guy, the French teacher, and met his Russian wife.

In Russia, New Year is the biggest holiday of the year.  Christmas was not celebrated during the Soviet era, but has made a comeback since the fall of communism, though in Russia it is celebrated on 7th January (because the Russian Orthodox Church dogmatically sticks to the old Julian calendar).  The period of 31st December to 8th January is a public holiday in Russia.  As teachers we are still expected to work – poor old Wesley has to go to Winter Camp for a week – but due to low subscription numbers, the activities we were supposed to be doing in the city next week have all been cancelled, so the rest of us all have a real holiday of a whole 9 days.  I contemplated visiting St Petersburg but I really need the rest, so I will stay in the city, though my friend Janna will come and visit me.