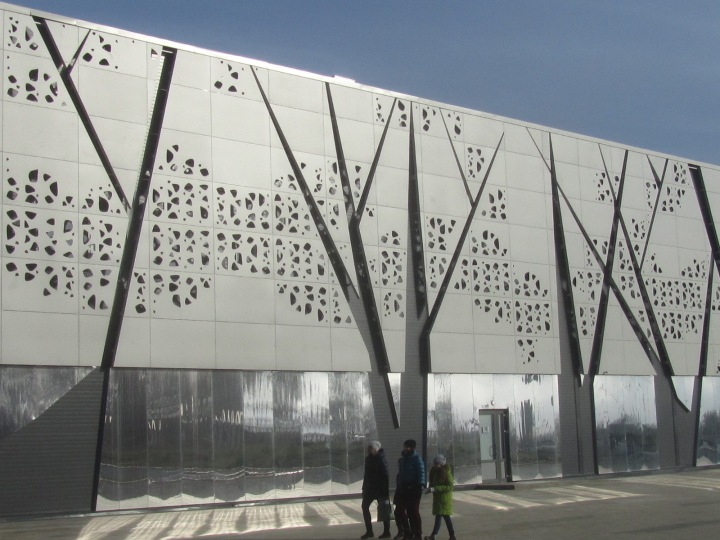 In the valley where the Tsaritsyn River used to flow, giving this city its original name, a new museum was built last year, the first major development in the old river channel.  (The river, prone to regular flooding, was long since redirected into underground channels).  Its opening weekend in the autumn was very busy, and thousands of people walked past our block on the way from the main street and stations down to the museum.

Living so close, it was a source of shame to me that I had not been to visit it yet, so on Saturday, the last day of my friend’s visit, we went down to check it out. 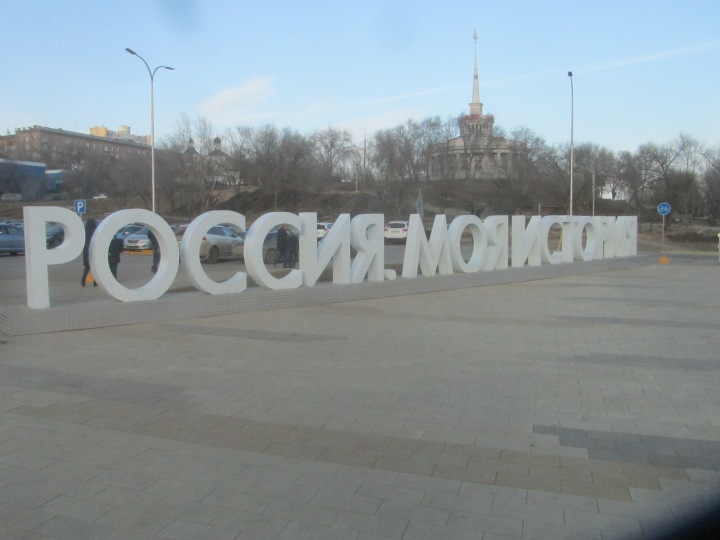 It’s actually really easy to get to, just turn left and go down the steps and you’re there.  It has a wide open approach with a children’s play park, several two-person swings and those huge letter-signs this time saying “Russia, My History.” 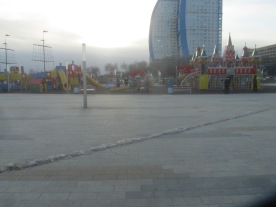 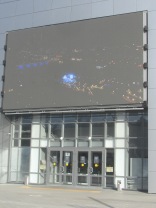 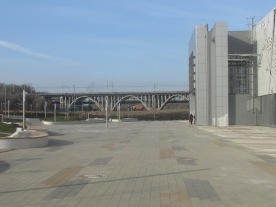 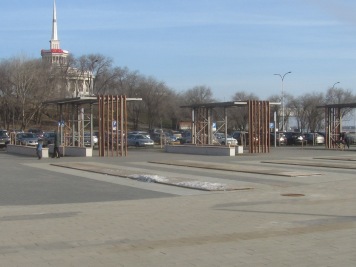 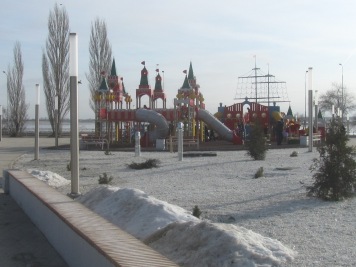 As it was quite cold we didn’t hang about and hurried inside.  As always in Russia there was a cloakroom to leave your coats.  Ticket prices were quite reasonable (certainly compared to the aquarium in Vladivostok!!!) – only 150 roubles per person for each exhibition.  There were two exhibitions, pre-20th century history, and 20th century history.  We chose the first. 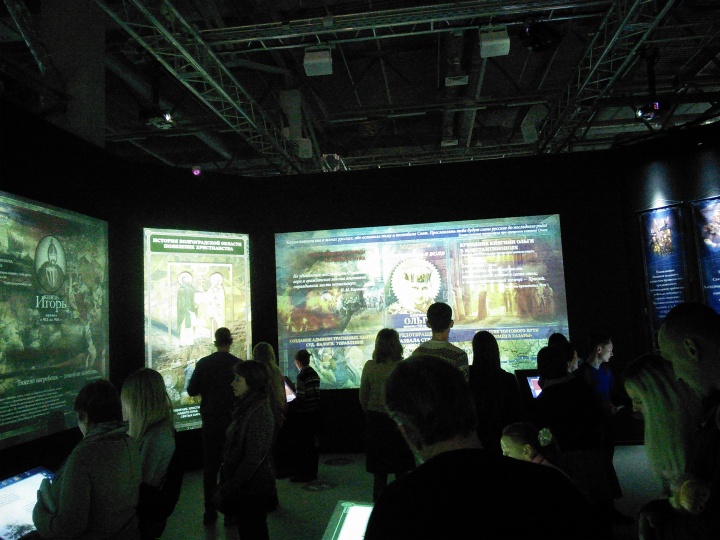 The exhibition consisted of interactive screen panels, where you could choose which information you wanted to look at, and projected dynamic wall displays – basically still pictures with little features like moving flames, waves, nodding horse’s heads.  It started in pre-history and then the founding of the Russian state by the Ruarik princes in 862. 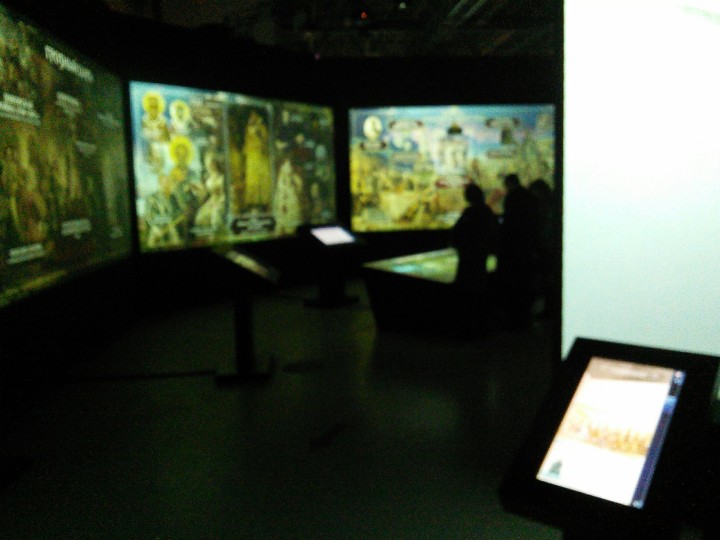 Every room had a new section of history and a display showing the size of Russian territory at the time, and important new cities founded during that period.  There were occasional audio and video displays too – one room in the middle was like a planetarium (with beanbags around the circumference) and seemed to cover the whole of Russian history in one short film. 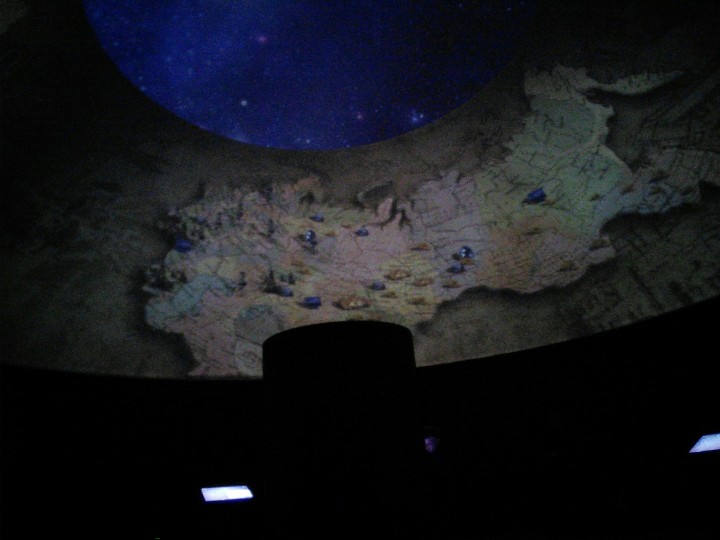 Up until the Romanovs, most of the displays had an English-language summary, although sometimes the English seemed a little clumsy and the tone very out of place.  For a few hundred years after the Romanovs, the displays continued to offer the choice of Russian or English information but when you selected English there was nothing there.  From about the 19th century onwards, the displays dropped any pretence of English translation – except for one film in the final room, about the final Tsar, Nicholas II. 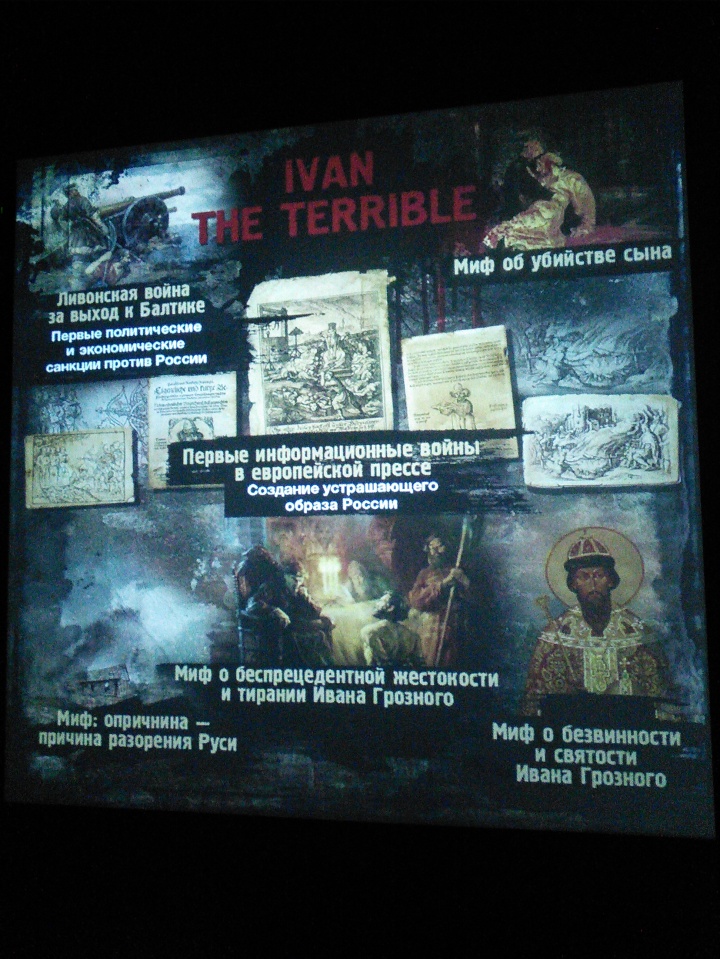 I found two things in particular that were interesting and informative in the way the museum chose to present them.  The first was Ivan the Formidable.  There was a long (translated) text explaining how, while he was a pretty mean guy, he was not especially or significantly meaner than several other contemporary European monarchs, whose reputations and legacies are discussed a lot more respectfully.  It spends most of the totality of the text detailing the atrocities of each of these rulers comparing them with Ivan’s own historically verifiable actions.  It is careful to refer to him as “Ivan the Formidable” at all times, but all that subtle revisionism is undone by the title of the huge wall display dominating the room, “Ivan the Terrible!!!”

The second thing I found more surprising, the film about Nicholas II and his reforms before the revolution was hugely sympathetic to him and implicitly critical of the educated elites that fomented the revolution.  It gave a list of statistics of Russian improvements under Nicholas’s policies and how the lives of workers and peasants had improved massively compared to under his predecessors, and that it was the very intellectuals who benefited from this increase in prosperity, education and civil liberties that ungratefully took down the Empire and undid many of the improvements.

In a country that venerates its revolutionaries, that has statues of Lenin, Dzherzhinsky and other revolutionaries in every town, and streets, districts and towns named after them, it is surprising to find a State-supported museum so openly venerating one of the Imperialist Romanovs.  Perhaps the 20th-century exhibition is worth a visit to see how Russia is re-evaluating itself now that Soviet Communism is no more?