It started while I was watching random Youtube videos.  The same ad kept appearing before the start which I eventually recognised as Russian opposition leader Alexei Navalny.  I couldn’t work out what he was saying but there was a date and a location under the video which I could translate, it said “People of Volgograd, join our Team Navalny gathering, come to the square on Port Said Street tomorrow at 2pm, dress up warmly.”

I had no plans for Sunday so I decided to go along and see what was up.  I wondered whether Navalny would make a personal appearance – I later learned that he had co-ordinated similar events in all major Russian cities and he himself was attending the one in Moscow.  So Volgograd was just one of many gatherings.

By coincidence, there is a Navalny office on my block of buildings, it has been openly displaying Navalny 2018 banners and balloons for months, even after the Russian Electoral Commission stated he was prohibited from standing because of a recent conviction for embezzlement (Navalny says this conviction was entirely politically motivated to get him out of the way, and has called for the election to be boycotted).

I suspected there would be a large police presence to deter and control the protest, but (at first anyway) that didn’t seem to be the case.  There were a couple of police patrolling my block, probably keeping an eye on the Navalny offices, but I didn’t see any more until I reached the square – the one in front of my school office, with the fountain and the library.  There was a healthy gathering of people, maybe 200, but nothing that looked like any leadership or organisation.  Many were taking pictures.  One or two were carrying flowers (to show they were demonstrating peacefully), one or two were carrying signs – this one has some cynical lyrics from a song by the band Leningrad.

Two policemen showed up and casually strolled through the crowd, they didn’t say anything or show any special interest, I guess they were just making sure there were no problems or criminal activities.  There were people of all ages – young college-age kids alongside old women.  Some people had brought their families.  Some people got bored waiting and drifted away, but others were steadily arriving.

Eventually – after 2.30 – some guys appeared carrying Russian flags and Navalny balloons (the letter N in the Russian alphabet looks like our H).  They started handing them out and they gradually dispersed through the crowd.  I was expecting someone to get up and make a speech but nothing like that happened, some of the flags started moving towards the street, and everyone else started following them.  It looked like this was going to be a march!

Rather than immerse myself in the march, I cut across the square to try and get some pictures, expecting the march to continue onto the main boulevard of Prospekt Lenina.  But something happened.  The march had been blocked by a car parked right across the pathway, and standing next to it were a group of policemen.  I managed to get close enough to see the conversation between the people at the front of the march – an older lady – and one of the policemen.  The police didn’t seem angry and didn’t look like they were stopping the crowd from continuing but they were carefully positioned so that the crowd would have to split to go past them. 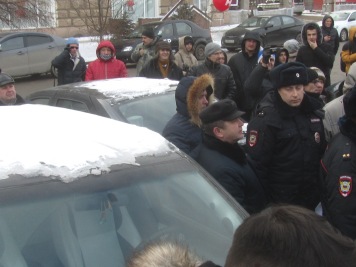 Someone let go of one of the red balloons, which floated up into the sky – I felt like I was in the middle of a Nina song.  One of the more vocal agitators urged the crowd to carry on past the police, and it did, splitting into seperate streams and then reconstituting itself on Prospekt Lenina, and heading south.  That was the way home for me anyway, so I just walked along with them.  Up the street, with a few chants along the way, and a few cars passing by tooting their horns in support.

To continue up Lenina you can’t cross Komsomol Street, you have to go under the subway.  So that’s what the marchers did, all of them, down one set of stairs, under the road, and up the other set of stairs, with ordinary citizens walking passed looking bemused, and maybe slightly afraid.

This is when things started getting dystopian.  I wasn’t sure which way the marchers were going, I expected them to continue up Lenina, but it became obvious that wasn’t going to happen because something was blocking them.  A line of policemen.  In riot gear.  With sticks. 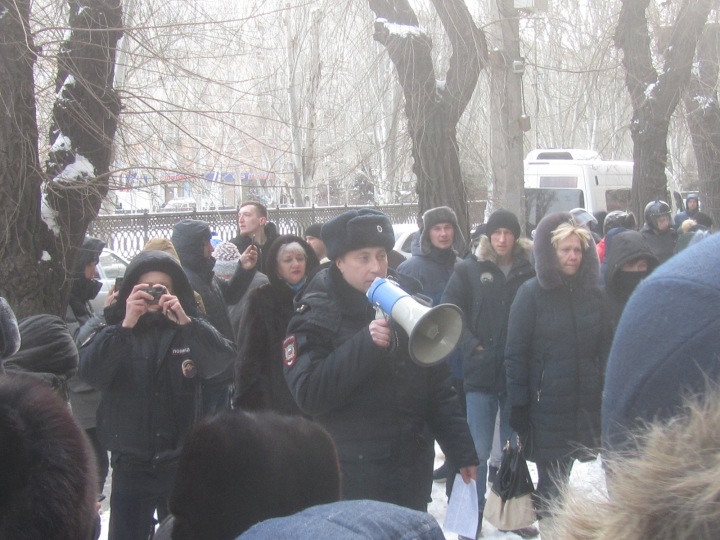 Every few minutes more police and more police vehicles would arrive.  A policeman with a megaphone addressed them.  I have no idea what he was saying but I think it was probably “This assembly is illegal, please disperse and return to your homes.”  Of course there were people in the crowd who were not happy about that.  In earlier times I would have called them “the Bolshy ones.”  The lines of riot police parted occasionally so that uniformed officers could come through, and take one of the people in the crowd back through the lines to a bus, which might, in some places, be described as a “paddy wagon.”

Mostly they went quietly, but the crowd would not disperse, and more police were arriving.  I saw four policemen come through the barrier and physically manhandle a young woman – I think it was the girl with the Leningrad sign – and take her back through the lines, while she squirmed and resisted.  This was starting to veer sharply from “interesting slice of Russian life” to “potentially dangerous situation” so I decided it would be better if I wasn’t part of the crowd any more. 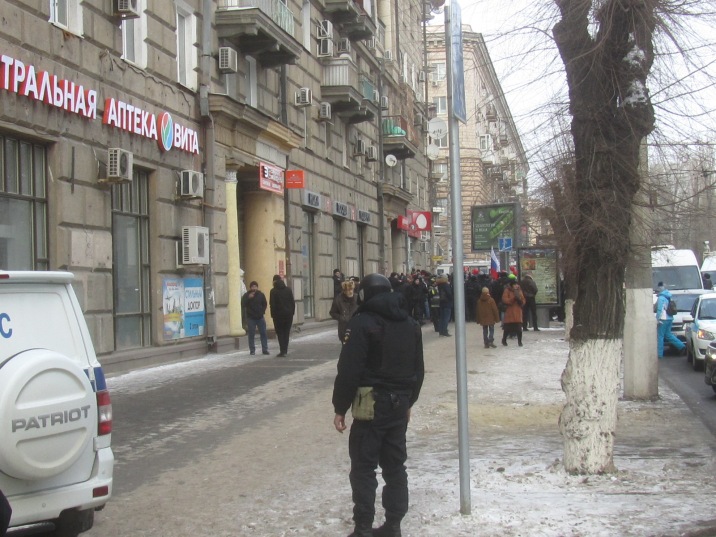 I checked the island in the middle of the boulevard, it would be a good observation point, but the police had formed a line across the entrance there.  So I just walked around the block – coming out on the other side of the police line where there were still a handful of interested people observing but they were clearly not part of the march.  I found myself next to the bus, and saw another young female protestor being led on board to be processed.  She was smiling, only one officer was accompanying her and the only indication that she was a detainee rather than just a friend of the policeman was the firm hand on her arm.

Eventually the protesters decided to take a different route, and I witnessed the blackly comical scene of the line of riot police, in full riot gear, sprinting past me up the street to try and beat the protestors to the top of the Alley of Heroes.  All the other police got into their various vehicles, and some sped off like detectives in a 1970s cop show, with the rest following behind more sedately.  I strolled up the street after them curious as to what would happen next.

I saw what looked like a normal bus at a bus stop, but with loads of riot police getting on.  This didn’t make any sense.  It turned out I was completely wrong.  It wasn’t a bus stop, it wasn’t a normal bus, and the riot police weren’t getting on they were getting off.  LOADS of them!   They were marshalling to decide where to deploy to best protect the city from the dangerous crowd of protesters, with their dangerous flowers and balloons and flags. 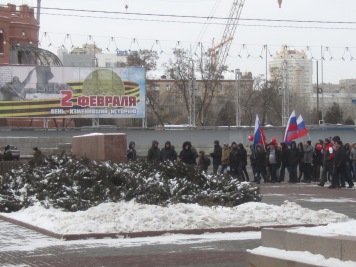 I took a walk up the Alley of Heroes towards the War Memorial – Liberation Square is at the top and this is where most of the city celebrations take place, perhaps the marchers were heading there.  Indeed they were.  Police vehicles proceeded them, sirens on full blast, but the line of flag-waving marchers continued – with some police walking among them.  They turned into the Alley of Heroes and started coming in my direction.  The police didn’t seem to like this, one officer with a megaphone was seemingly trying to get them to come back to the main street and keep walking this way. 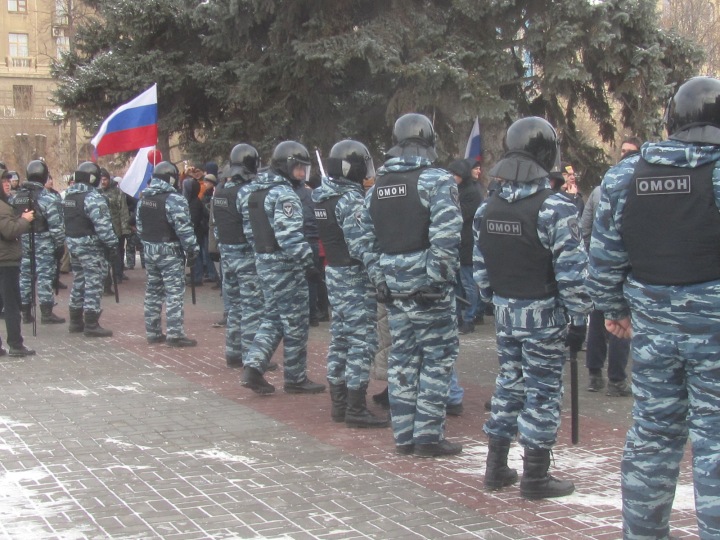 On the other side of the war memorial, a new line of riot police had formed.  And then, behind the protesters, a cohort of a new kind of policeman appeared – wearing camouflage uniforms, wearing bullet-proof jackets, and carrying much bigger sticks.  I backed to the very edge of the pathway hoping they wouldn’t confuse me for a protestor and fortunately they walked right past me, and closed in on the now much smaller remnants of the protest march.  They had nowhere to go.  Police behind them, police in front of them, they were surrounded.  I think in England we call this “kettling.”

I thought it was prudent to put a bit more distance between myself and what was happening so left the Alley of Heroes and walked down the adjacent street.  I was not the only person watching what was going in.  It seems that eventually the protesters were “persuaded” to disperse as it became very clear they were not going to be marching anywhere else today.  Groups of policemen were all over the city centre.  I had some shopping to do so I did it, and went home.

Later on the news, I read about the protests in cities across Russia.  The major ones had not been sanctioned or approved by the police.  Navalny was arrested and detained in Moscow, he tweeted that this proved the need for protests and gatherings and oppositions and called on others to stand up and take his place – one person doesn’t matter.  The President has refused to acknowledge Mr Navalny or use his name, and as things stand, the President is overwhelming favourite to win a further term.  I’m still waiting for my invitation to one of HIS rallies..!