Spring finally arrived in Volgograd.  The weather got warmer, the snow gradually melted, the cafes began to construct their outdoor seating areas.  On one day snow was still falling from the sky, only a week later I was walking outside in short sleeves and sunglasses, this is how quickly the seasons can change here.

Now there are swifts, swooping in the early evening sky feasting on insects, without ever landing.  V-formations of geese and other birds fly overhead returning to their northern breeding grounds.  The Volga looks blue and vibrant.

The city is getting ready for the World Cup.  The stadium is complete and the first match with paying spectators has been played there.  Some of the hotels and roads still need finishing off, but there has been a lot of cleaning and tidying – new buses and trams, new bus-stops, new signage and crossing signals, removal of kiosks cluttering up the boulevards, the buildings of the old market outside Superman have been demolished and neat new stalls set up to replace them.  The main roads have been resurfaced.  The road to the airport is finished and is now very quick and smooth, and on returning from my vacations this week, I discovered the new Terminal B is open – planes can take passengers right to the terminal building instead of having to use a bus transfer.

There were some other changes not connected to the World Cup.  The terrible mall fire in the Siberian city of Keremova has led to the closure – temporarily at least – of a couple of the city’s malls, while safety checks are carried out.  The large Seven Stars mall near Traktorniy has been closed the last couple of times I was down there, and I was told Europa mall (the one near Mamayev Kurgan) had also been closed.  I have been away for a couple of weeks so perhaps they are open again now.

There was a nice little Spring balloon exhibition at the still-open Voroshilovskiy mall, I took a few pictures. 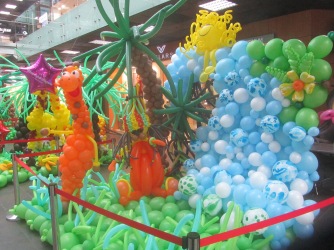 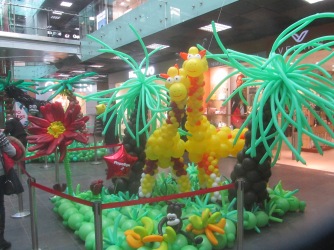 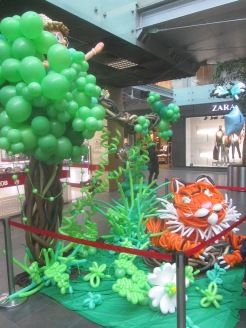 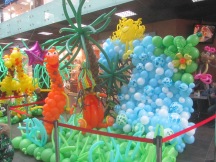 At the school the news is that things keep changing, as always.  Peter has got married and will leave at the end of May, he will be replaced by an Australian called Tim, and a new teacher Gillian started at the beginning of May.  Wesley will stay until July then he will go to work in the St Petersburg office.  As things stand my contract expires at the end of August and I don’t know what awaits me after that, I could theoretically go anywhere in the world!

Speaking of going places, I have much to tell you about my travels in the north of European Russia over the last 2 weeks, and I will do so in my next few posts!