With less than 2 weeks to go before the World Cup, Volgograd, as one of the host cities, is getting ready.  But I have to say they are cutting it fine.  The stadium appears to be ready and has already hosted a couple of warm-up games (including the Russian Cup Final, final score Tosno 2-1 Avangard Kursk).  There are lots of shiny new signs – with English translations – making it easier to make your way around the city if you don’t speak Russian.  But what are they doing with the pavements!? 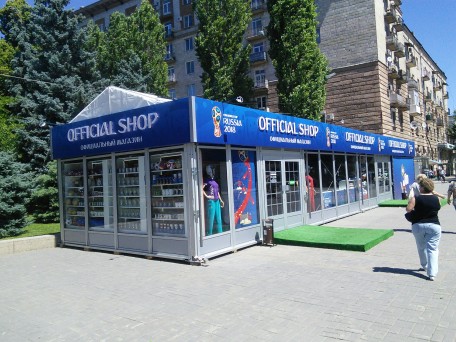 I agree, a year ago the pavements were in pretty bad shape.  The drive to remove a lot of the small kiosks and huts that cluttered up the public pathways left lots of holes in the ground, with gas pipes sticking up, electrical wires hanging from the streetlights.  Most of the pavements were tarmac and concrete, or large flagstones.  There are one or two places you can still see cobblestones. 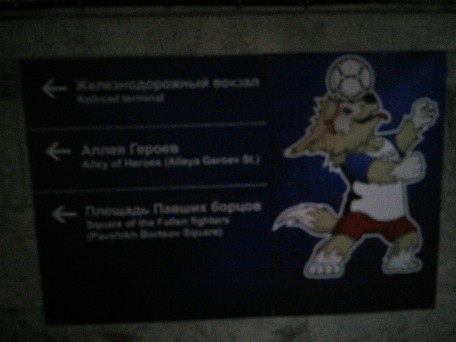 Mascot. But can you spot the bush-baby behind him?

So someone has apparently decided that all the pavements along Prospekt Lenina, between the Astrakhansky Bridge and Lenin Square need to be repaved, in a consistent, safe, level, and visually appealing way.  Good plan, definitely.  The problem is they only started 2 weeks ago (as I returned from my travels) and as a result, to get it done in time, they have to dig up every street at the same time.  I don’t know where they have got all the workers from but there are at least a dozen gangs out on the streets at any given time.  Last weekend I walked past two separate groups that had basically stopped work and seemed to be trying to work out what had gone wrong with their planning – it isn’t easy putting all the bricks in the right places so that there are no gaps at all, whilst allowing for street furniture like trees, lampposts, manholes, adequate drainage etc. 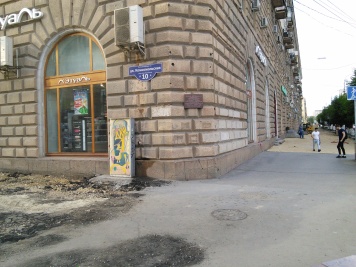 Doing both directions at once – no possible alternative route!

Coming out of the Komsomol subway 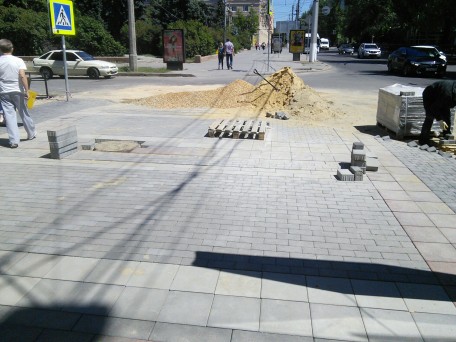 The process seems to be (necessarily) simple.  Diggers hammered at the old surface then scooped up all the rubble and put it into lorries to take it away.  Workers with drills and shovels cleaned up the bits too small for the diggers.  Then they made sure the surface was level, and covered it with cream-coloured stones (too big to call it gravel).  On top of this they put the fine sand.  There have been piles of stones and sand all up and down the street.  This is where it gets complicated.  They have a range of different coloured flagstones – red ones, grey ones, and the small, black “filler” ones.  There is a set pattern that repeats along the whole length of the road.  A line of grey next to a line of red, then they switch over in the middle of the pavement.  The workers lay all the grey stones first then have to put the other stones around them and hope that they have got all their measurements right to leave exactly the right amount of space!  Once the bricks are down they run over them with a smoothing machine which lodge them in place.  There is no cement between the flagstones – I guess over time the gaps will fill up with sand and dust, but they seem pretty secure.

I have got to watch this process close up because the pedestrian management system is somewhere between haphazard and non-existent.  For the first week, people could either get sand in their shoes or walk on the road and hope that the traffic wouldn’t run them over.  Eventually in some places the workers started putting temporary barriers on the roads so that the pedestrians had a safe place to walk, but of course this has made traffic flow a lot slower.  Many pedestrians just continued walking on the pavements anyway, regardless of what work the workers were doing, just squeezing around diggers and piles of rubble and materials.  It is a bit easier now, with most of the pavements at least partially paved but there is still a lot of jumping around over gaps and unfinished parts of pavement. 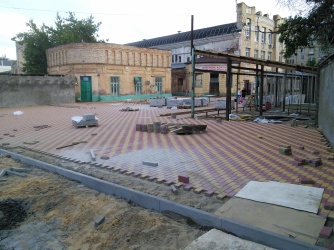 Paving over the market 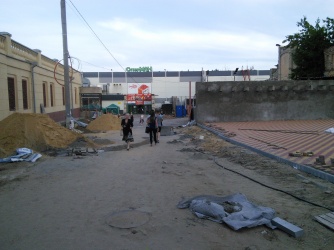 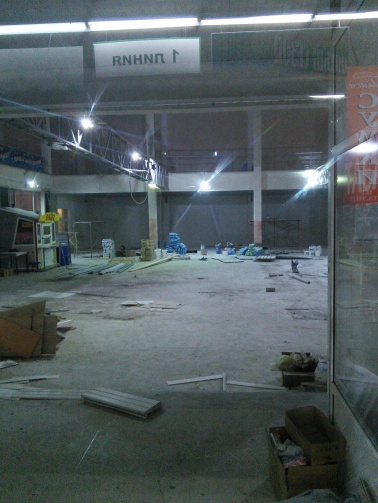 I should also mention the renovations to the market.  The indoor market was being renovated last time I looked – I don’t know where all the stallholders went.  Many of the small buildings around the outside market have been knocked down, but this has created a big space and they are bricking over the whole area to make a big market plaza.  I must say this was some of the worst pavement surface in the whole of the city and the cost of hosting the World Cup is surely worth it for this alone!

Some special temporary (maybe permanent in market terms) green stalls have been set up for the flower market, and some of the more permanent but not especially attractive buildings at the street end of the market have been boarded over (except for the doors) and the boards covered in giant photographic displays of all Volgograd’s districts.

The babushkas selling their produce still line up every day along the alley with their foldaway tables and stools and I hope they are allowed to do that for the duration of the tournament as for me this is the most visibly definitively traditional Russian element of the city.

The final outing of the Three Muskateachers 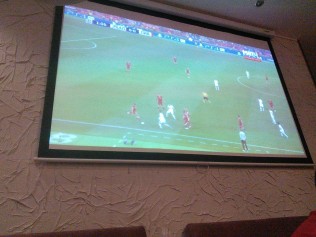 In other news, Peter left, the International Manager has also left, and most of my classes have been dwindling away so I only have a handful of students left.  This week I am doing some parts of City Camp – a stripped down version of our Summer Camp programme in the school buildings.  We had a leaving party for Peter – it was just Wesley, he and I, and we found a restaurant that was showing the Champions League Final on a big screen.  Wesley will be next to leave, in July, and my contract runs out at the end of August.  There is a new teacher, Gillian, who seems to be settling into the job quite well, and there is meant to be an Australian arriving to replace Peter.  But with the staggered summer camp programme starting, the new guy being based in Volzhskiy, and my likely preoccupation with the World Cup over the next month, it is possible that Peter’s leaving party was my last social outing with other English teachers here.  We’ve had some memorable ones in my time!