Whoah-oh-oh, drinking all your vodka

Whoah-oh-oh, England’s going all the way!

So goes the song that England fans were chanting throughout their opening group game against Tunisia and beyond.

I’d never been to a full England international match (only a ‘B’ international in Sheffield), and I’d never been to a World Cup match so seeing as I was in Volgograd anyway, it seemed like I simply had to go.  We applied for tickets in the lottery back in November, and the game we were given, we found out at the draw, would be the second game in Volgograd, Nigeria v Iceland.  The first game would be England v Tunisia.  We applied again for specific tickets, and not only were we successful, they only cost us 2000 roubles each rather than the 6000 we paid for the Iceland game!

Of course I also had to get a Fan ID, but this was free and the benefit was I could get free travel on Volgograd transport during the World Cup period.  That was a little more difficult to apply for on the site because I don’t have an address in Volgograd I can use for delivery, so it ended up getting sent to my mother’s address in England then forwarded on to my friend who brought it down with her to Volgograd! 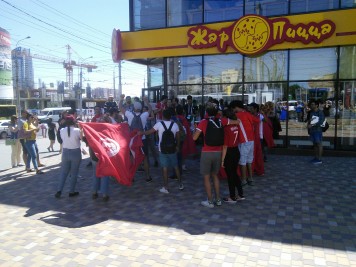 The game was the final game of the day and we went to Fan Fest for the first game, where both Tunisian and England fans were very much in evidence.  I had seen Tunisian fans around the city over the previous few days but the England fans all seemed to appear at the last minute. 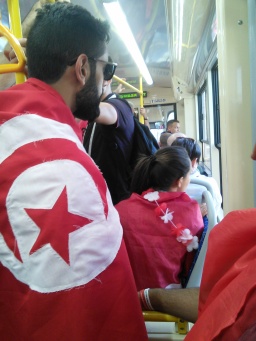 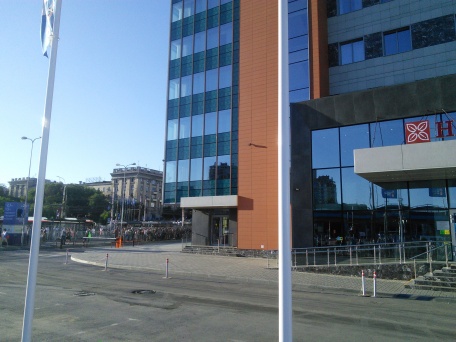 We wanted to see the parks around the stadium with all the fans gathering before the game, so we took a rather full tram to Europa Mall and checked out what was happening.  There was basically a big party.  The Hilton Garden Hotel was apparently where the England team were stopping over so a big crowd was gathered at the fence waiting hopefully for autographs and photos.  Lots of fans were mingling around the mall, which has a fan ID centre and an official FIFA shop.

In the park itself there was a stage with traditional Russian singing and dancing (from different aspects of Russian culture and cultures within Russia), there were also mimes walking around, people on stilts and in costumes – there was very much a party atmosphere.  I got to see a little bit more of Baku Park which I had only briefly checked out the previous Sunday. 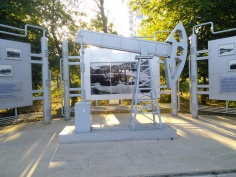 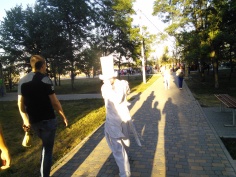 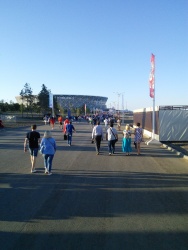 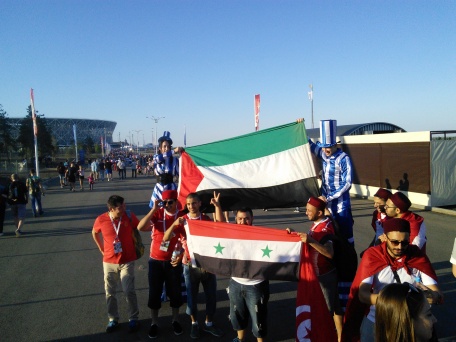 There was some confusion about how to get in, the allocated gates according to the tickets were not open and everyone was being directed to Gate 5, perhaps because they were just starting with 1 gate for everyone in the early stages.  We just kept walking until we found somewhere that would let us through, then had our Fan IDs and match tickets scanned, and then we were in! 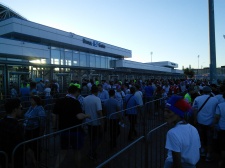 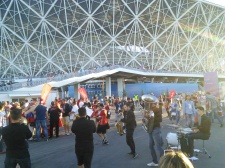 After a long walk in the hot sunshine I was very anxious to get a drink.  There were no places to buy drinks on the way to the stadium, and in the stadium there were huge queues to the beverage stalls.  We found a man who was selling cold drinks from a hamper, but we waited and waited and just as we got to the front he said he had run out.  We then waited in the beverage queue but it was taking so long and I was worried we were missing the Belgium game which I assumed might be being broadcast in the stadium, so we decided to get refreshments in the stadium.

By now I was getting very thirsty and a little angry, we found our gate and asked a steward if we could get food upstairs, he pointed us to the downstairs refreshment counters which again had large queues.  I waited first in a queue that didn’t exist (it was the line for getting out after you get your food) and then in a queue that moved very slowly.  Every time someone ordered a beer they had to very slowly pour a full Bud into a glass which seemed to take ages.  And everyone was ordering beer.

Having queued 3 times just for a drink – and also annoyed that the drinks cost 200 roubles (twice as much as Fan Fest), I only had enough money for one drink and they would only accept card payments from another of their sponsors, Visa (my Russian card is of course Mastercard), I almost lost my temper when my friend told me there were food stalls upstairs with very small queues.  Fortunately she had a Visa card so we were able to get refreshments and I was able to calm down a little, at least until I discovered the stadium wi-fi didn’t seem to work on my tablet. 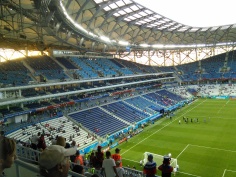 We had good seats high behind the goal that Tunisia would attack in the first half.  The pre-match entertainment was rather insipid, there was no information about the result of the Belgium – Panama game (I later found out Belgium won 3-0).  The match was still continuing but not being shown on the big screens.  The stadium itself looked impressive and colourful. 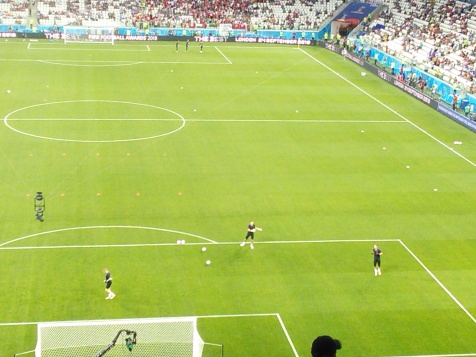 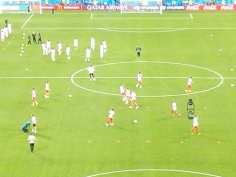 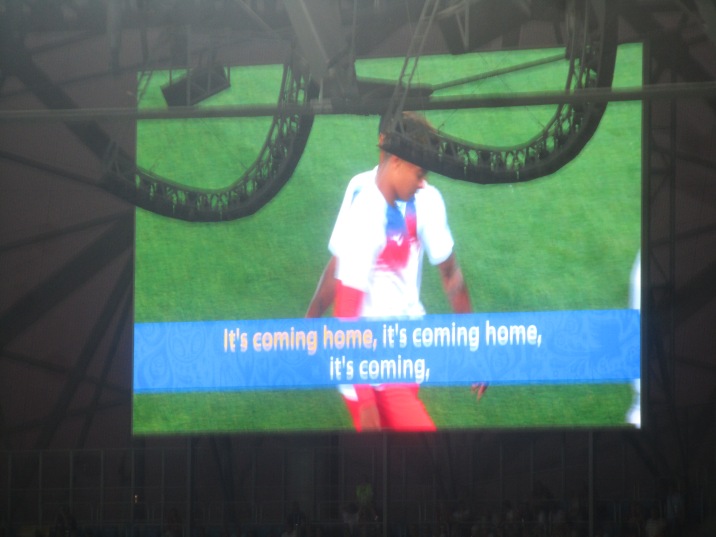 With all the queuing and waiting, by the time we got to our seats there was only 1 hour left before the game.  Eventually England’s goalkeepers came out to practice and then Tunisia’s team, and finally England’s heroes.  And then suddenly they were gone and the hosts were encouraging us to sing along with a Tunisian supporter’s song, and for England “Three Lions.”  I guess I was just about the only person in my part of the stadium who knew all the words. 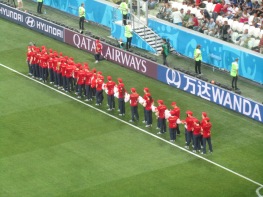 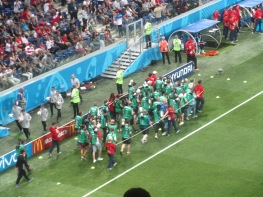 Then suddenly there were officials and volunteers and giant flags on the pitch, and then the teams were coming out for the National Anthems.  And then kick-off!  England started well and got a goal after only 14 minutes or so (Harry Kane, of course), they led for most of the half but then before half-time Kyle Walker gave away a penalty and below me, the Tunisian player Sassi scored past Jordan Pickford. 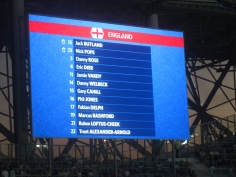 At half-time I went to explore the lower levels and get some pictures closer to pitch level, and brave the queues once again for a little more 200-rouble water.  I could see the England supporters beneath us, with their flags and costumes. 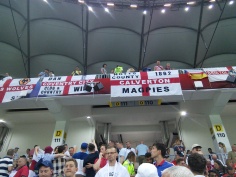 I got back after the second half had started but only a couple of minutes and didn’t miss anything.  It was a tense second half, and I spent it gradually getting used to the idea that England would have to settle for a draw in their first game.  Whenever there was a corner or a free kick I would get my camera out in the hope of catching the great moment, but it was like my camera was cursed, nothing came of any of them. 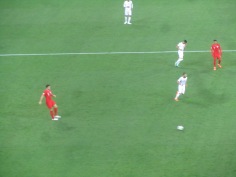 And then, in injury time, England had another corner and I kept my camera in my pocket.  GOOOOOAAAAALLLLLLL!  Harry Kane with a header at the far post!  I think the evidence is quite clear, I personally was responsible for England’s win! 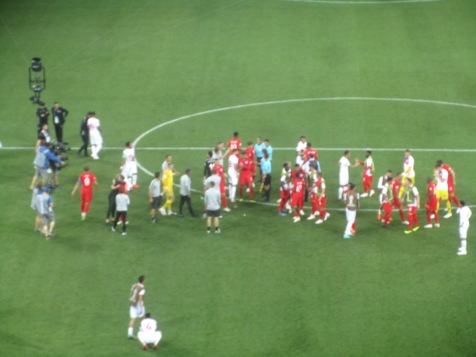 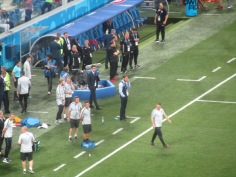 The England players came up to our end and applauded beneath us and the stadium started gradually emptying.  We stopped a little while to take some pictures and then as we were coming down the stairs we heard the unmistakable sound of the England band – a drummer, a trumpeter and a horn player – playing the tune that they had played almost throughout the whole match.  I thought it was “September” but now I could hear the new, improved lyrics, and of course everyone was singing along.  We slotted in behind the band and joined in the parade singing our way out of the stadium! 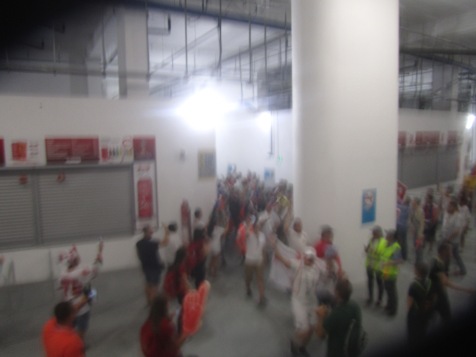 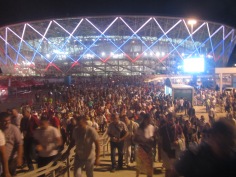 After the match we crossed Prospect Lenina – completely closed to traffic – and found another band playing jazz music surrounded by a growing crowd, some of them dancing.  We stopped for a couple of tunes then started to make our way back towards home.  After squeezing through the masses of people gradually filling a small number of buses and trams, we found ourselves behind the band again, and walked with a large (but not crushing) crowd of other fans repeating the song, or sometimes just shouting 1-2-3-4 at the start (with a fist pumping the air).  In the end we walked almost as far as Lenin Square before hopping on an empty bus that hadn’t come from the stadium (immediately followed by a score of fans who I can only presume saw our move and realised they could come too.  Remember, all bus travel on match days is free if you have Fan ID. 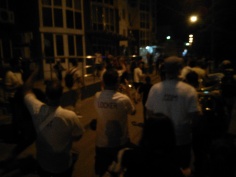 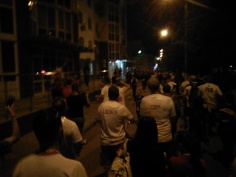 I can’t really complain (even though I did) – my tickets were great value for money, it was a fascinating match, a unique experience and my team won with a dramatic last-minute winner.  And, I learned a new song!