The decisive round of games that determined who would go through to the knockout stages began on Monday.

I had lessons which meant I missed the whole first half but I was able to dash to Fan Fest to catch the end, by which point Russia were already 2 goals behind and with a man sent off.  The embankment was so crowded I couldn’t find a seat, or even anywhere to stand without blocking someone’s view, so I just wandered down under the big screen and watched from there, taking a few pictures of the crowd.  I hoped Russia might get a consolation goal leading to some huge celebrations but it was not to be (despite some good chances) and eventually Uruguay got a third. 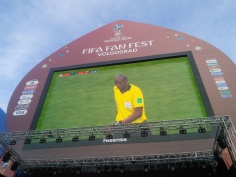 The other match was taking place at the Volgograd Arena, I saw the goals later on at home, a good first World Cup win for Saudi Arabia and a goal for Mo Salah of Egypt. 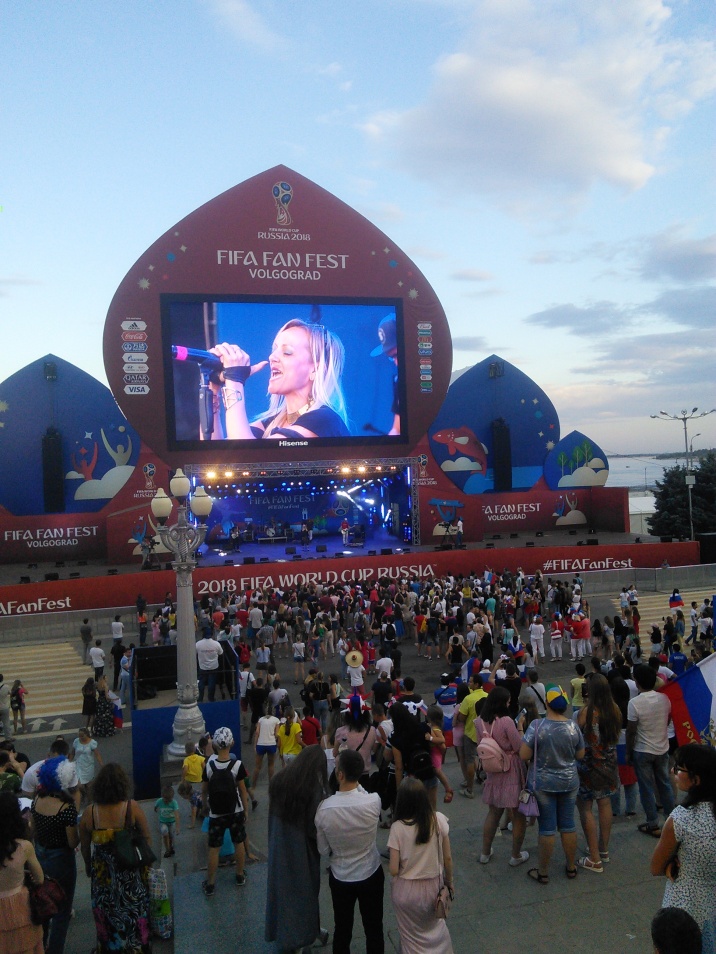 After the match there was a bit of a party atmosphere, there was a singer called Masha who sang some interesting heavy rock ballads, and there was the usual montage of people in the crowd on the big screen.  Apparently I was shown quite prominently at some point because two of my colleagues told me separately that they had seen me on the screen at the game.

I tried watching both games simultaneously at home, which got confusing 2 minutes from the end when both games had VAR checks that resulted in goals.  Morocco had done brilliantly to lead against Spain but the late Aspas equaliser originally ruled out for offside was allowed to stand.  Meanwhile Iran had played superbly against Portugal, they survived a penalty miss by Ronaldo (who was almost sent off in another VAR review) and after being behind for a long time in the match, they managed to get a deserved goal from the penalty spot during injury time. 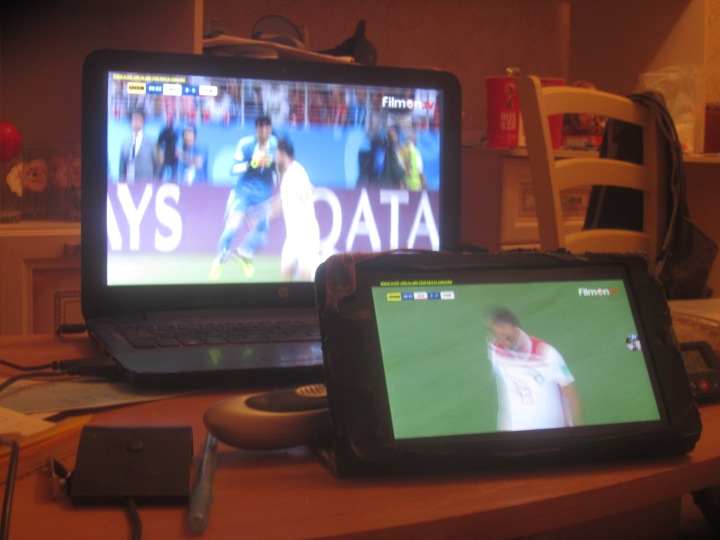 I was in Sovetskiy district while these matches were taking place and had lessons that started at the same time as the match.  But I managed to get a stream on my tablet and watched the last 15 minutes of the France game in the office.  I needn’t have bothered, both teams knew they were through and were playing out a very cynical 0-0 draw.

Peru did well to get a win over Australia but it didn’t help either team. 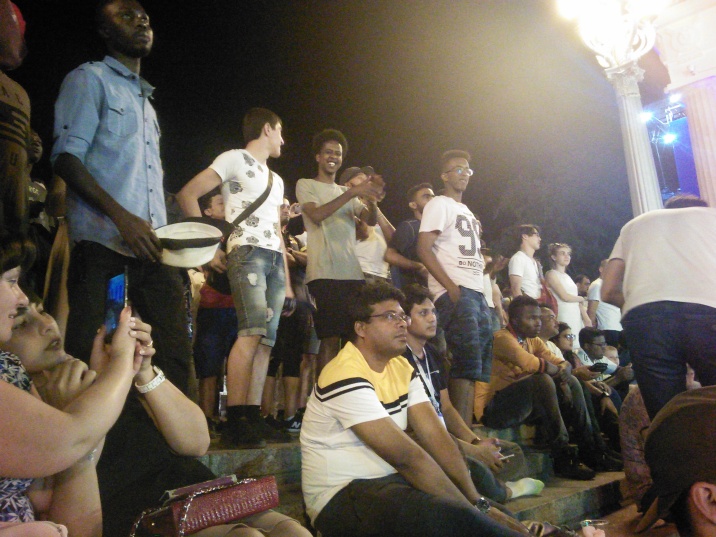 I got back in time for Fan Fest, got myself a good position, brought my rug to sit on, had really good internet throughout the game and was able to watch most of the other game at the same time.  It was quite a roller-coaster with Argentina taking the lead, then being pulled back by Nigeria, who would have gone through at Argentina’s expense if that result had stood.  There were a noisy group of Nigeria supporters behind me but when Argentina went ahead again they became a lot quieter.  Most of the Russian supporters seemed happy for Argentina to go through but I was keeping an eye on the other game where Iceland had come from behind against Croatia and were looking like they might get a second which would put them through and knock Argentina out despite their win.  I could feel some other sets of eyes behind me on my tablet, and when Croatia killed any hope of Iceland qualifying with their own second goal, I felt obliged to announce it to the people around me.

After the game the Nigerian fans were still singing and dancing, a rhythmic, tribal call-and-respond chant with words that sounded like “I don’t know where to go, I don’t know what to do, I don’t know Messi, I don’t know Argentina….”  They were very soon surrounded by curious Russians pointing their camera-phones at them and seemed to love the attention.

I had lessons in Traktorniy but only a couple and they finished with just about enough time for me to get back and watch the early matches.  In the event I missed the first half hour because I decided to stop off for some shopping.

This was a BIG result, but I watched it on a small screen, doing my best to watch both matches and keep track of the permutations.  Sweden surprised everyone in the other game by getting a dominant result against Mexico who had looked very strong in their first two games.  This meant that South Korea had no chance to qualify, nevertheless Germany laboured against their quietly efficient defence and their goalkeeper playing the game of his life.  In the end Germany’s only hope was to beat Korea and get into a 3-way tie with Sweden and Mexico and hope to finish ahead of Mexico on goal difference.  They needed a goal but in pushing forward to get one, they left big holes at the back and Korea, remarkably, scored 2 goals in injury time to win the game and knock the Germans out, while also going out themselves.  The first goal was the result of a VAR review, the second goal, with the German goalkeeper deep in the Korean half was hilarious.  It wasn’t long before Twitter and Facebook filled up with comments like “Don’t mention ze VAR!”

I know Brazil games always have a special atmosphere but I couldn’t bring myself to head down to Fan Fest again, I needed to do some cooking so I watched the game in my kitchen.  There was never really any risk of Brazil not qualifying, once they got their first goal you could see Serbia were not going to be able to turn things around.  I wasn’t able to cook and watch two football matches at the same time, so I had to catch up with the other game later.  Switzerland could afford to slip up against Costa Rica – they looked like they had won it with a late goal but then Costa Rica equalised in injury time.

Frustratingly I had a late addition to my lesson schedule that started at the same time as the match.  I managed to get a message to the student to come earlier but I still missed the beginning of the match.  I got to the Fan Fest before half time and watched the last 10 minutes of the half, but it was hot and I didn’t have my tablet with me, so I decided to go home and watch the second half in the air-conditioned comfort of my apartment.

Senegal only needed a draw to qualify but Colombia were too good for them and once they got their goal, it seemed Senegal’s better chance of qualifying would be a second goal for Poland in the other game.  This was taking place in Volgograd – I had seen Japanese and Polish fans walking around earlier – Poland couldn’t qualify if Colombia won but wanted a win for the sake of price.  Japan, it seems, gave up in the second half and just crossed their fingers that Senegal wouldn’t equalise.  The last 20 minutes of the game were a non-event with neither team trying to get the ball or make any effort to attack.  Sadly this meant that none of the African teams made it through to the second round, despite some very good performances in individual games.  Mo Salah, Ahmed Musa, Wahib Khazri and Sadio Mane are all going home.

I had been really looking forward to this game and it turned out to be a disappointment in every possible way.  It started when a random cup of beer someone left on the ground at the Fan Fest made contact with my foot and splashed all the way up my shin.  I had come with my tablet, hoping I’d be able to listen to English commentary while watching on the big screen, but the thing wouldn’t connect to the internet at all.  I couldn’t even get text updates from the BBC website until half time.  Of course I could see what was happening in the match, and England’s reserve team was not playing very well against Belgium’s reserve team.  There was a theory that both teams would have preferred to lose the game so they wouldn’t have to play Brazil in the quarter-final (assuming they could beat Colombia in the 2nd round), and it seems they were both playing as if this was the case, at least until Januzaj curled in his goal to give Belgium the “advantage.” 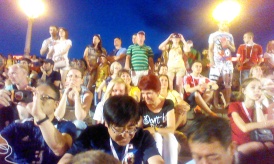 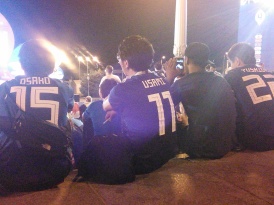 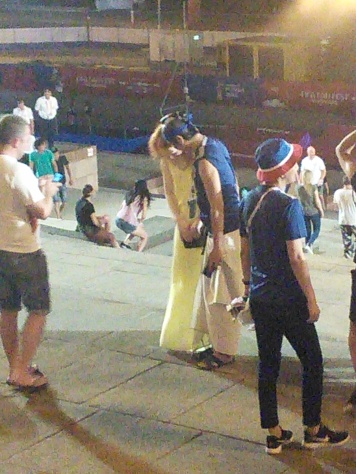 People back home are worried that this game will cost them momentum, but it is nice for England to be in the position where they can rest their best players, play a game with no pressure to win, and still be in the knockout stages next week.  Colombia have had to fight with their best players to get to the same point.

After the match I again hung around a while – one of my former students recognised me and came up for a chat, and I had random Polish and Russian fans recognising my football shirt and saying things like “Alan Shearer” and “Newcastle United” to me.  There were loads of Japanese and Polish fans remaining from the earlier match, the Poles were generally drunk and boisterous and the Japanese generally a little bit crazy – one of them was dancing in some kind of wooden tap shoes.  Lots of them were dressed up in flags, headscarves, facepaint and so on – there was a Pole dressed as a Native American.  All of them, Japanese, Polish, Russian were mingling happily without any tension or trouble.

Friday was weird, a day without football, and no early lessons, but from Saturday onwards all the games will be knockout games.  England’s next two games (if they win the first) will not clash with any of my lessons but I might have to miss the 5pm games on Monday and Tuesday (Brazil v Mexico and Sweden v Switzerland).