Not the free-flowing football goal-fest you might have expected after France 4-3 Argentina and Belgium 3-2 Japan, but a deserved victory ground out by France after neutralising Belgium’s attacking riches.  I watched at the Fan Fest, which was still pretty well attended despite Russia having left the competition.

The pain of being an England supporter!  It’s the hope that kills you.  Amid spattering rain and the occasional rumble of thunder, I sat in my preferred position at Fan Fest, near the top of the steps, as central as possible.  Occasionally you have to wave people out of the way as they stand in front of you oblivious to the people behind them, occasionally you have to hold your breath as someone’s cigarette smoke drifts in your direction, and occasionally people trying to reach the lower levels squeeze past you, risking knocking over your drink and standing on your stuff.  But the view is good and at half-time you can beat the queues to the drinks stalls. 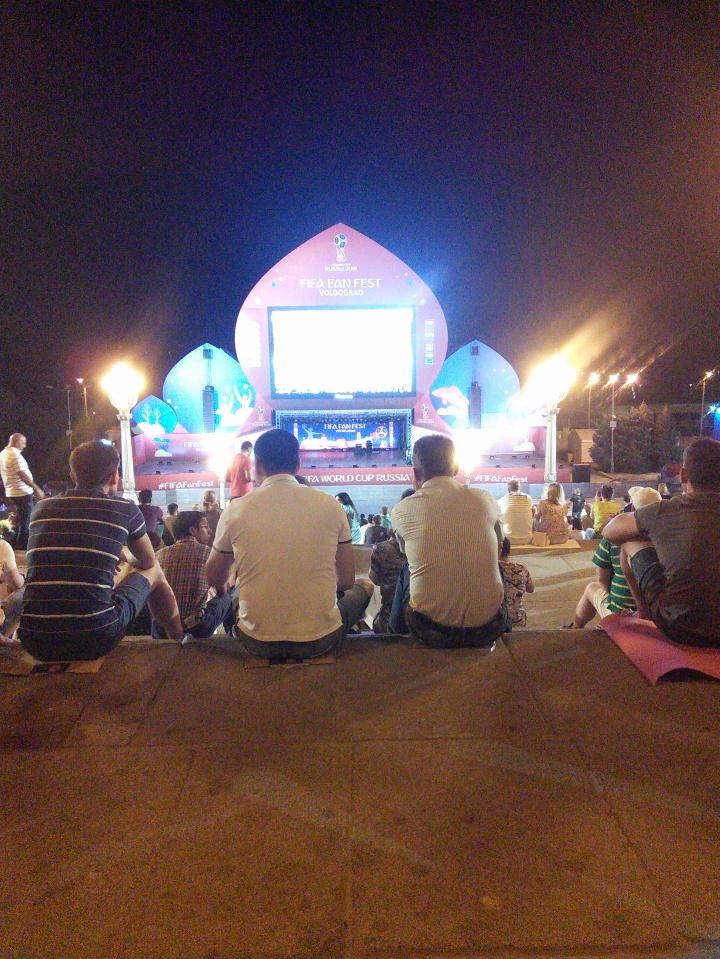 Of course it all started well, right in the first few minutes when another England set piece resulted in a beautiful goal.  It looked so promising, Croatia were tired from extra time and penalties in their previous two games – or were they just pacing themselves?  Generally England controlled the first half and were defensively solid.

In the second half, Croatia grabbed a goal out of nothing – but that’s what they do.  It is what their midfield players and attackers are capable of doing.  England wobbled, but survived one or two close calls to guide the match to extra time.  And then it happened again, another ball that could easily be defended, wasn’t.  Suddenly a Croatian player had our goal at his mercy, and Mandzukic didn’t miss.

While there was plenty of the extra time period left, England’s attacks were toothless, and Croatia’s defence was solid.  They swatted away our set piece deliveries like bothersome flies.  Of course I kept hoping, but I knew that bringing this game back would be beyond the players we had on the pitch.

So England would not be in the World Cup Final, but they had still had a very good tournament, achieved way more than anyone predicted for them, and a handful of our players – Trippier, Pickford, Maguire, Henderson – established themselves as reliable, capable international stalwarts.  There is a solidity about England that wasn’t there before (albeit we conceded in every game but one) but what there isn’t is creativity.  Hopefully that will come with our next generation of players, currently World Champions at under-17 and under-20 levels.

And Croatia – that wasn’t even a country 30 years ago – was in a World Cup Final, with players like Modric, Rakitic, Vida and Subasic capable of taking on anyone.  They beat my hosts Russia, my home team England but you had to admire their spirit, skill and perseverance.

I didn’t head to Fan Fest for this one, I just watched it on an intermittent stream at home, not really minding that I was missing so much of the match.  Belgium were on top and deservedly won though there were some encouraging signs in the second half before Belgium got their second goal that England could have got back into it.  No-one remembers if you finish 3rd or 4th so it isn’t a major disappointment.

Finally, one of the best games of the tournament!  Of course I was at Fan Fest, and it was very well attended – the best attendance for any match not involving Russia.  I took my favoured position again and was able to relax and enjoy the match without any pressure.

I had watched the build up and pundits opinions (as best I could with the streaming limitations) at home, including the Closing Ceremony which featured Nicky Jam and Will Smith singing what has become known to me as “The Halftime Song” (actually “Live It Up”) because of the inevitability of its appearance at Fan Fest.  But it was nice to see it being performed live. 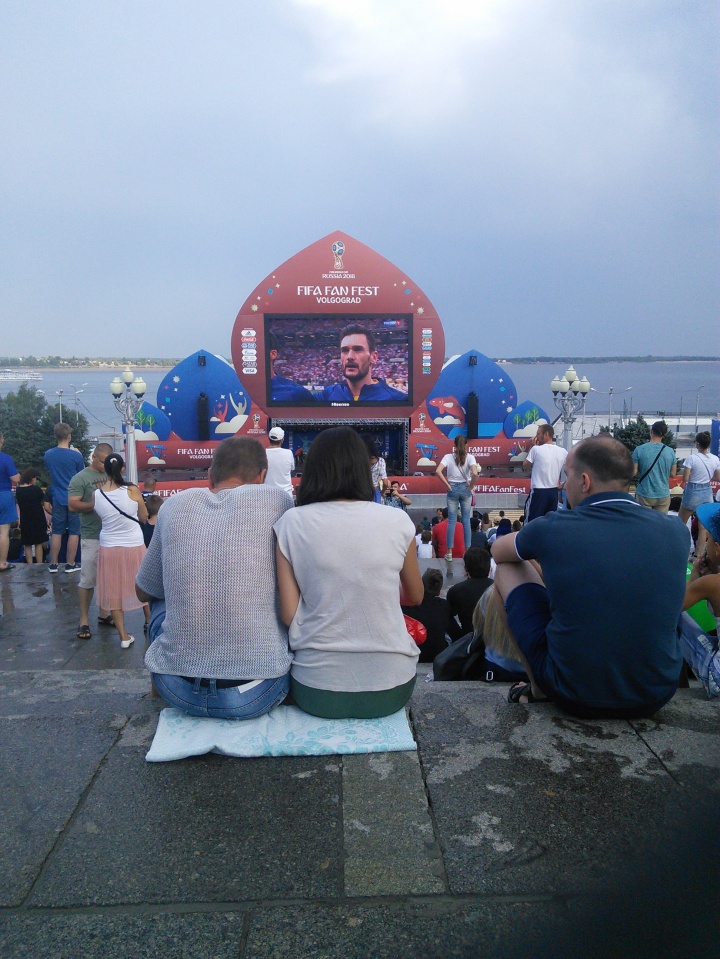 After some epic thunderstorms over the weekend, it started off quite wet, but if there was any rain at all it was just the odd drop.  The space to sit was a bit more limited than usual as some spots had big puddles.  Most people knew now to bring something to sit on even if it was just a piece of cardboard or a plastic bag.

I thought I was a neutral but after France took the lead with an unfortunate own goal from a dubious free-kick I realised I actually really wanted Croatia and Luka Modric to win.

Just like their three previous knockout games, Croatia came back, and equalised with a beautiful goal.  But fate was not on their side.  A corner where the ball touched the hand of a Croatian player was referred to VAR – the system that is supposed to be used to correct clear and obvious errors by the referee.  The referee had initially said no penalty, but after studying the video footage for what seemed like several minutes, he awarded the penalty.  In my view, if the referee cannot see immediately that there is an error in his decision from one look at the video footage, he shouldn’t change the decision because, if there is an error at all, it isn’t clear nor obvious. 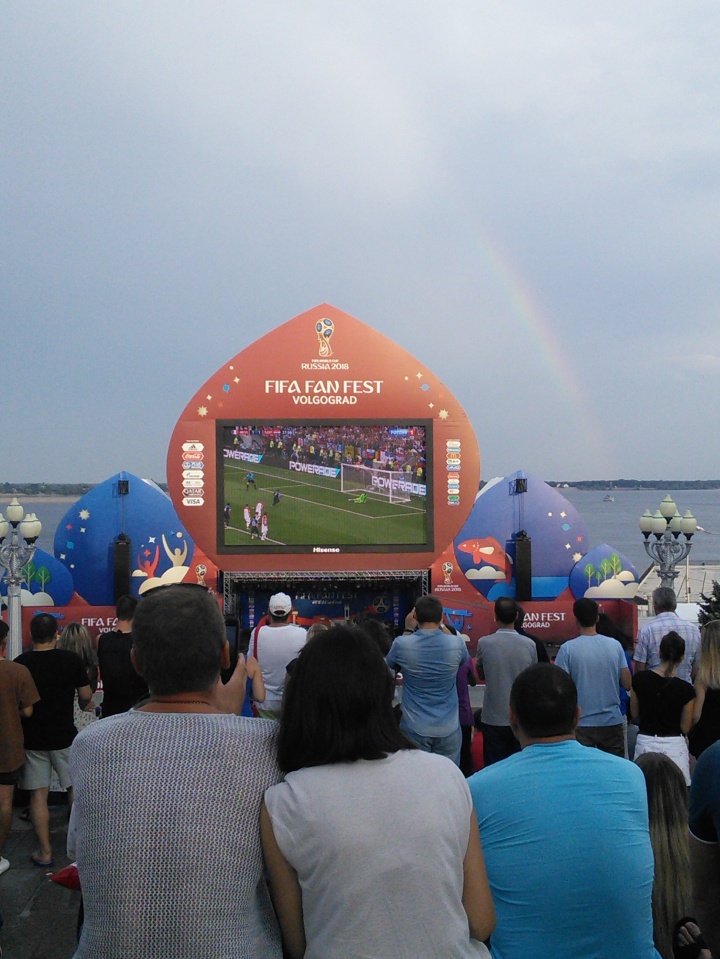 Griezmann took the penalty, and as he did so I took a photograph, as the screen was neatly bracketed by a rainbow.  Things were certainly looking sunny for France who had been outplayed in the first half by Croatia but managed to get themselves 2-1 ahead.  There then followed the usual performance of The Halftime Song and the Budweiser Guy trying to get everyone to do Mexican waves and shouting, followed by some people on the crowd being shown dancing on the big screen.  The usual nonsense, but for the last time.

In the second half Croatia were still controlling possession but now were vulnerable on the counter-attack.  Twice France broke through and shots from Pogba and Mbappe found the net from outside the area.  With 20 minutes still to go, an uncharacteristic error by the French goalkeeper Lloris allowed Mandzukic to pull one back – if they could have got one more it would have really unnerved the French, but it was not to be.  France defended professionally and Modric’s magic was ineffective.  France were the World Champions.  Modric got the consolation prize of being named the tournament’s best player, quite rightly. 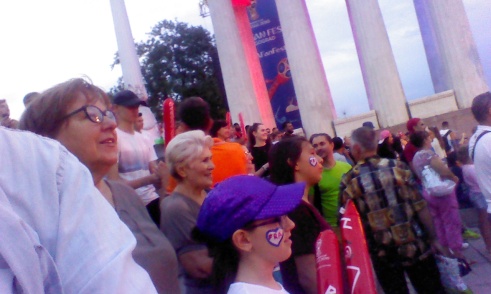 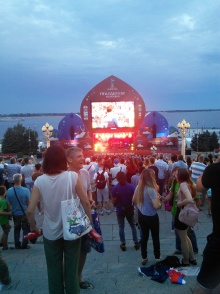 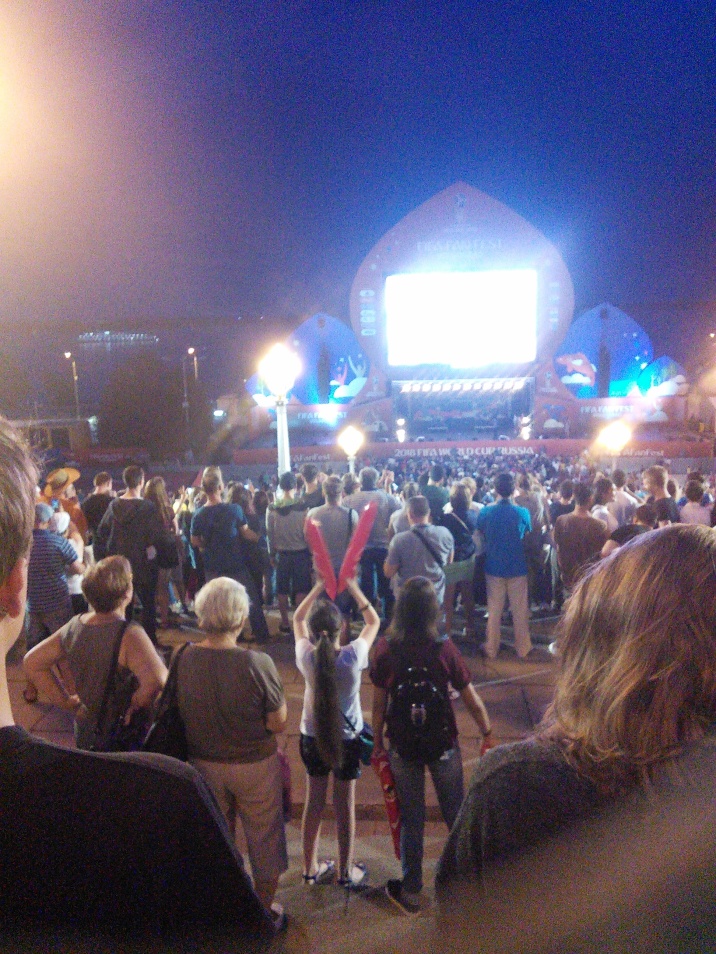 The skies darkened while we waited for the presentation ceremony.  Rain poured down in Moscow as the players were awarded their medals and the World Cup trophy, but in Volgograd the cloudy skies held back and we stayed dry.  There was a brief glitch in the broadcast but they stayed with events in Moscow until the presentation was complete.  Then we were presented with a Swiss band called Kadebostany – actually quite good, I stayed for 5 or 6 numbers. 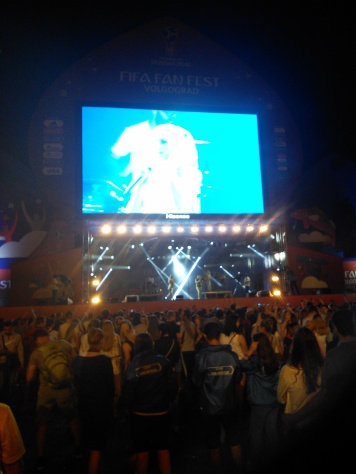 So, now it’s all over – after 1 month, 64 matches, 169 goals, 2 hat-tricks, 219 yellow cards, 4 red cards, 22 penalties scored, 7 missed (not counting the 4 penalty shootouts) and over 5 million visitors to FIFA Fan Fests across the 11 host cities.  No more football until – actually the qualifiers for next season’s Europa League have already started, and the Premier League begins in less than a month.

For me the next 3 weeks are all about Summer Camp, starting on Tuesday.  I have a better idea what to expect this year – I’m going to the same place but with a different team and different kids, and I’ve already worked with some of the material I’ll be using at City Camp.  I’m not yet certain I’ll have internet access but I’m trying to resolve that!

After that I’ll have a short break and then back to teaching.  I extended my contract to October because I don’t anticipate starting a new job until the new year so I may as well take an extra couple of months of paid work before coming back to the British Isles in November to sort a few things out.  Ultimately where I go next will be more of an opportunistic decision than one that is carefully planned out.  Let’s see what’s out there!