Friday was a day off from training, but the administration process rolled on.  In the morning I headed west, towards central Tokyo to open a bank account with the bank recommended by the school because of its English-language service.

The bank is near Tokyo station, and the directions I had were from Tokyo station, but I did my homework and decided it would be cheaper to just stay on one line and get off at Nihonbashi, it was a short 10 minute walk to the bank, and I used Google street view to pick out some memorable landmarks to guide me.

I also decided rather than buying a ticket for each journey to take the leap and get a PASMO card – this is one of two general travel cards for Tokyo transit, in fact you can use it to pay for bills and groceries in convenience stores too.  It’s kind of like an Oyster card in London, but over the course of the day I discovered it goes down very quickly! 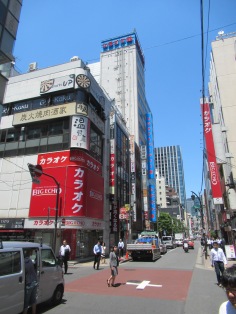 The part of Tokyo I arrived at really is all tall tower blocks and businessmen, though one of the landmarks (a giraffe wearing a crown) did seem a bit incongruous.  I found the bank without any trouble at all.  In fact on the way I stopped in at a bakery because I spotted a tasty looking crusty baton loaf, which, indeed, was tasty.

I introduced myself at reception and produced the necessary documents.  There was a brief moment of concern as I showed my contract of employment as the date stated the contract started on 1st June.  I knew at least one other teacher had been told he couldn’t open the account until he had started working, but the trainers had told us to say we had already started training and were being paid for these 2 weeks before the contract started.  I went with this approach, and the receptionist seemed happy to continue. 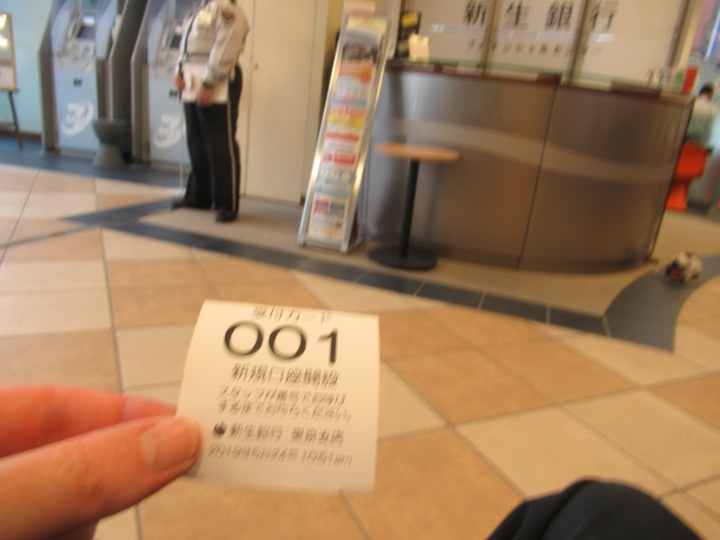 I was given a ticket (number 1) and asked to wait for a clerk.  While I was waiting, Eugene, one of the other teachers from the training came in.  We indicated to the receptionist we were in the same situation, so I imagine with Eugene the process would have gone a little more quickly.;

I was beckoned over by a clerk, a bookish-looking man (by which I guess I mean he was wearing glasses) whose English was passable without being fluent.  We went through the process of checking the details I’d given at reception, giving more information, having my residence card photographed, and filling in forms.  Most of the forms were on a tablet and just involved me reading, checking boxes, and occasionally signing my name with my finger.

One of the questions I was asked was whether I was a gangster, had been a gangster or had any gangster affiliations.  I guess in the UK that would be the money-laundering/organised crime clause, but I love the directness of the translation!  As the clerk went to get my card printed up, he asked me to watch a couple of videos.

He then asked me if I wanted a Gaica Pre-Pay card (it sounded like basically a debit card).  There were certain benefits to this in that if I used it regularly I could achieve gold membership which meant avoiding ATM charges.  I confirmed I did, and that’s where things got interesting.  The application had to go through Gaica’s website, and could only be made in Japanese so we had to do it there and then, with him helping me.  Unfortunately part of the validation process was that Gaica would send me an email with a passcode which I needed to enter to complete the registration.  When we got to that point he asked me to check my emails.  I had my tablet with me but there was no wifi signal.  I asked if the bank had wifi?  He went away – either to check or consult with colleagues how to overcome this problem.

In the end what we did was we walked together, out of the bank, down into the subway, and into an area with a free wifi network!  Then we stood in the passageway while I tried to get my temperamental tablet to open emails without switching itself off.  It was a close run thing, but it managed to restart itself before I gave up, and I got the application validated.

We went back into the bank to complete the process, just as I was about to leave with all my documents, one of the clerk’s colleagues interrupted and asked if I had been told about the automatic 3-month gold membership (I hadn’t).  This means I don’t have to pay any ATM charges for the first 3 months – after that I can stay gold as long as I put 10,000 yen on my Gaica card every month by a certain date (which I probably would anyway).  So ATM fees, which generally are ubiquitous in Japan, might not be a problem for me at all.

I left the bank satisfied with a job well done.  My next planned destination was the school’s head office where I was told I could collect my travel expenses for the training week.  I followed the directions on the map they had given me but these were just confusing.  First they seemed to tell me to get off at the station before Kanda, then they told me to take an exist from the station (East) that didn’t exist (there was only North and West), then they named a street I had to follow but there were no street names as far as I could see, and even if there were I probably wouldn’t be able to read them!

I wandered around for a while to see if I could recognise the building or one of the other mentioned landmarks (a noodle shop) but I was increasingly conscious of time – I had to get back to the sharehouse to meet the house manager and sign my contract by 2pm.  So I had to abandon this mission and make my way back to the Tozai line and Nishikasai.

I was back in good time, and the house manager came and again everything was signed on tablet, with a copy being emailed to me.  She spoke very good English and in fact said she had been a student at my school when she was a small girl!  (it has been around a long time).