Friday was nominally a day off but it was difficult to relax knowing my first day of teaching was the next day.  I would be teaching at Kachidoki – at least I already knew how to get there from the peer observation, and I knew there would be 1 private adult student and an elementary school group, but it was the pre-schoolers I was nervous about.  Of course I had encountered them before – I had taught one five-year-old in Russia at the request of his parents, and I do not remember those lessons with affection.  I had done the Santa Claus shows which was ok, I wasn’t really teaching, just handing out presents mostly.  And I had done a few shared classes with very young children where a Russian teacher led most of the activities.  But I had never run multiple classes of pre-schoolers – some of whom had barely begun to learn Japanese!

It was an early start.  Most days at the school the first lesson is 2.00pm but weekends tend to have early morning starts because there is more demand for lessons while children are not attending school.  We are supposed to arrive at 9.30 for 10.00am starts but that doesn’t leave a lot of preparation time, so I aimed to arrive about 9.15, hoping the office would be open.

It wasn’t, I had to wait about 6 or 7 minutes until the counsellor Ayumi appeared.  She showed me where the books and materials were and which room I would be using (it was the one with the ankle-level windows), and left me to it.  I had my carefully prepared lesson plans from Thursday, but then Paul – the teacher I had observed – showed up and offered to help by telling me about the first three classes, which he had covered the previous weeks, and giving me some familiar activities that they would recognise and be comfortable with.  We started writing up completely new lesson plans 15 minutes before the lesson started.

Fortunately with very small children, repetition is very helpful and the same activities that work for a 5 year old generally work for a 3 year old, with a bit of tweaking.  I had pretty much the same lesson plan for all my first three lessons (after those there would be a lunch break where I could think about the afternoon lessons).

One of Paul’s ideas was using the Alpha-Mat – basically a jigsaw floor puzzle where children had to match big chunky English letter shapes with the empty spaces.  My first students (in fact most of the children through the day) arrived late, I followed my training – wait outside the classroom, sit down so you are at their level, ask them a question before they can come in.  The first little boy – probably 5 years old – was into the alpha-mat straight away.  His classmate joined us a few minutes later and between them they had put all the letters in the right places after 3 or 4 minutes, and I decided it was time for the Hello song.

I did some more activities with a storybook and some flashcards and before I knew it the lesson was finished.  My next student was a little boy on his own, 3 or 4 years old, who had a habit of just staring.  I followed more or less the same lesson, alpha-mat, song, storybook, flashcards.  The third lesson was more interesting, these were the youngest group, 2 and 3 year olds – all girls, and all with their mums.  One of them was quite bright and very engaged in the lesson, one of them was a little distracted and preferred hiding around the room, the third one just clung to mummy and barely said a word.  The other two girls seemed to enjoy the songs and the actions, at least, and they all seemed engrossed by my story (from a book, about a hippopotamus called Charlie).

And again, the lesson didn’t drag, there were no awkward pauses, we got through what I planned to get through, and the mums all seemed happy enough.  It was technically lunchtime but I wasn’t going to eat, I needed to try and get ready for the next tranche of lessons at 2.00pm.  Fortunately I was told that one of the later students had cancelled, meaning there was a gap before my last lesson – one I hadn’t planned because I didn’t know about it until today!  So for now I could just concentrate on the next three.

I was not the only teacher, there were two others – a very tall English guy, and a friendly Japanese teacher.  Paul had not stayed, he only came in as a courtesy to help me out.  I should mention one other teacher who stayed in reception all day and kept the kids entertained while they were waiting for lessons, or while their brothers and sisters were being taught.  This was an actual robot.  It didn’t move from its spot, but it had a fantastic range of movement in its arms, hands, head and upper body.  It had the cute voice of a young Japanese woman, but on its chest was an interactive tablet which the children could press to take English quizzes.  When the quizzes were running the voice switched to that of a stern male American.  The younger children loved to just press the buttons and hold the robot’s hands, the older children tried to do some of the quizzes (although in some cases it was the mum giving most of the answers!). 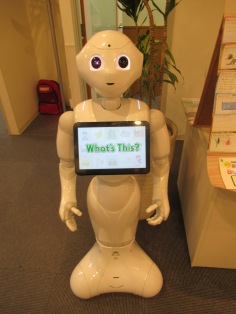 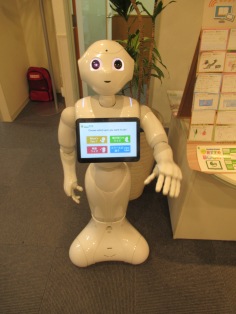 The afternoon lessons were a lot easier for me.  The lesson with older girls (7 or 8) at 2pm was more familiar ground, and then I had my first adult student, whose English was pretty good, I was teaching him at the same time as another teacher was teaching his son.  The 4pm lesson was more difficult – this was a former classmate of the little boy I had in the morning, they had been separated because the 4pm student was too disruptive and was holding the other student back, at least in his father’s view.  He was a little rascal, but I kept him occupied with the alpha-mat game a little longer by distributing the letters around the room for him to find (and use up some of his energy).

He did wander out of the classroom to play with the robot and visit the bathroom – his mother and very young sister were waiting outside the classroom, and in fact his sister came in for most of the second half of the lesson and started joining in some of the activities (we were just playing with coloured blocks, basically, my plan of counting and building didn’t really work out).  The counsellor didn’t seem to object to this free tuition!

I had found out before that last lesson that the adult student at 17:45 would also not be coming, so the disruptive little boy was my last lesson of my first day.  I just had to check all the paperwork was done and all the books and materials tidied away.  In Japan the students usually refer to their teachers as “Sensei” rather than by name – in our school you can decide yourself how you want the children to address you – but even if I didn’t plan on using it, I felt I had done enough to earn the title.

One thought on “Sensei”